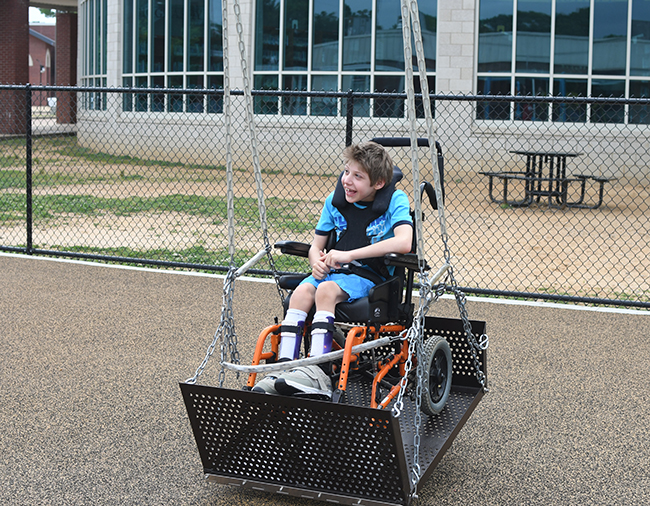 Jonah Sicks swings at a new playground at Lafayette Upper Elementary School in Oxford, Miss. on Thursday, May 17, 2018.

Lafayette County School District has taken new steps towards providing an inclusive environment for all its students, beginning with playtime.

“The reason why, of course, that we wanted to do it is so our children have a place to go play and can do the things every other kid can do,” Drewrey said. “A lot of times, the other equipment is high off the ground, and we have some that have challenges walking up stairs, definitely dangers of falling. The main thing is, they can’t swing on the swings like everybody else… and they want to be able to do things like that.”

Over the course of a week, as many as 40 students ranging from preschool to middle school spend their recess time at the playground. The modified equipment includes a main structure that is lower to the ground than traditional playgrounds, with widened steps, two slides and a climbing ramp. The playground also features a swing set, with a traditional swing, a cradle swing and a wheelchair-accessible swing.

The traditional swing is meant to be used by students who can assimilate in a general education environment just as easily as a special education environment. The cradle swing, Drewrey said, is ideal for students with cerebral palsy and other conditions which might limit their ability to sit up on their own. The wheelchair swing is something Drewrey said benefits two of her students in particular.

“The wheelchair swing is the biggest, best thing we’ve been able to do,” she said. “I have two that are in wheelchairs, so I would say that the playground was built with those two in mind. They both love it.”

The equipment rests on a specially designed padded surface, which is safer for students who might fall or are prone to seizures. The space has a picnic table, and the entire area is enclosed by a fence, so students who might risk running into the street otherwise are free to play as they wish, instead of being under constant one-on-one supervision.

The smile Drewrey sees on her students’ faces when they’re using the modified playground equipment is something she said brightens her whole day.

Currently, there are approximately 15 inclusive playgrounds in Mississippi, according to http://accessibleplayground.net. LCSD is the first school district in the county to provide a separate modified playground for its students.

Thomas Tillman, principal at LUES, said the project is a reflection of his school’s commitment to providing rewarding opportunities for all its students.

“I think it’s wonderful, and I think it says a lot about our school district,” Tillman said. “It says we’re very diversified, and we try to, as best we can, meet the needs of all of our students. They need that outlet, being able to enjoy recess, just like any other kid.”

Studies have shown that play is essential for childhood development, academically, physically and socially. Creating a place that solves many problems children with special needs face is something Tillman and Drewrey both said helps to increase confidence levels.

Drewrey said she’s a “firm believer” that all children are capable of learning and doing things just like their peers.

Whether it’s holding their hands up like they’re on a rollercoaster while swinging for what could be the first time, or being able to go down a slide, the modified playground is a way for the students to make memories, Drewrey said.

She also added that none of this would have been possible without the hard work of Marcia Lyles, Jennifer Stewart, the O.D. Smith Masonic Lodge and the Janet Whitten Scholarship Fund, who organized fundraisers to help pay for the playground.

Future plans for the site include the addition of a sun shade and possibly an additional picnic table.