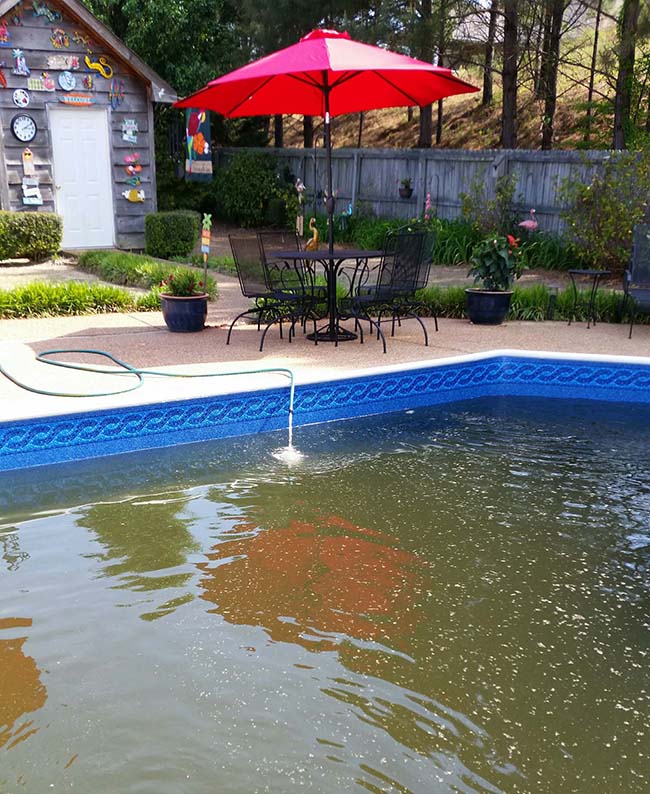 Joyce Johnson submitted this photo as evidence at a hearing concerning the Punkin Water Association, at the Chancery Building in Oxford, Miss. on Tuesday, May 15, 2018.

The chancery building courtroom was filled to capacity with customers of the water association. Out of 25 rural water associations in Lafayette County, Punkin is one of the more sizeable, with around 850 customers. Several brought jars with water samples collected from their kitchen sinks, in-home water filters and photographs detailing what one grandmother said her granddaughter described as “lellow water.”

Prior to the hearing, the residents came together to organize their grievances and elected Max Hill as their spokesman. Hill, a realtor who has been a customer of Punkin Water Association for more than a decade, said the problem begins with water quality and ends with management. As per protocol, those who gave statements were sworn in before they spoke.

“We are sick and tired of having pond water come out of our spigots, so dark sometimes you can barely see the bottom of the tub,” Hill said. “It ruins clothing, it ruins fixtures and water heaters. That we are made to bathe our children in it is disgusting.”

When the water isn’t brown, he said, it’s pink or frothy and cloudy. Hill also expressed concern on behalf of residents for the lack of notification of meetings, line breaks and subsequent boil water notices.

Presley, when he addressed the audience and water association board members, said the hearing would probably not be the last one held on the matter.

“I seriously doubt that this will be the first and only meeting of this kind,” Presley said. “This is a very serious matter for us. It’s very rare that we have this number of complaints, this number of people who have signed a petition related to their adequacy of service.”

Representatives and legal council from Mississippi Rural Water, the state Department of Health and the Public Service Commission were all in attendance in an effort to “work through the issues,” Presley said. Elected officials, including supervisors Chad McLarty and Kevin Frye, were in attendance as well. State Sen. Gray Tollison was also in attendance for part of the hearing.

Eight individual residents submitted physical or photographic evidence for the commission to review, including Joyce Johnson, who lives with her husband Kleb in the Lakes subdivision. Johnson submitted six photos of her swimming pool as evidence, saying the water permanently damaged its components, and what damage wasn’t permanent took hundreds of dollars to repair.

“We just got a new liner put in our pool. [We brought] pictures of the water going in the pool and where it stained my steps permanently,” Johnson said. “It took two weeks and tons of money to clear it up. The lakes in our subdivision have clearer water than our pool water.”

Johnson’s photographs were taken in the last two months, but some evidence presented dated back to 2016.

Brian Platt, a customer of Punkin Water Association who also happens to hold a PhD. in Geology, chose to present the findings of a small-scale experiment he conducted to the commission. Platt and his colleagues examined both the underlying geological causes for the poor water quality. They also researched the civil engineering aspect of the water system, including pipes, aging structures and water pressure.

Platt’s research showed that the layers of rock underneath Lafayette County are tilted west toward the Mississippi River. Because they’re tilted, the way they intersect with the surface creates an aquifer the city of Oxford can access, but is not present in most of the eastern part of Lafayette County because it simply eroded away. Due to this, Punkin Water Association obtains its water from a different aquifer, the Lower Wilcox Aquifer.

“I was able to track down tests that had been done on water samples, specifically from that aquifer and it was found that the iron content ranged quite a bit,” Platt said. “Iron is considered a ‘secondary contaminant’ or a nuisance mineral, which means the EPA can make recommendations on the level that is appropriate to have in your water, but it’s not enforceable. As a small experiment, I got some samples and got some iron test strips, the same kind you might test your pool water with. These check for dissolved iron in the water. When I checked out the two samples of water, it appeared as if they had almost no dissolved iron in them. It appears that all the iron in the water has been oxidised  and turned into particulate iron, or rust, which settles down in the bottom of samples that are collected.”

Platt suggested the association test for iron, and possibly manganese, more often. He also said the particulate iron is a likely cause of the dark brown-colored water. The solution he presented was to drill a deeper aquifer in a site that has less iron.

Dave LaBanc, another customer who spoke at the hearing, pointed out one legal issue the board had largely ignored – the lack of an accessible copy of the water association’s bylaws. According to LaBanc, he was turned away and told the bylaws were “filed in Jackson if you want to go get them.” The copy he did obtain was missing sections and appeared to be typed on a typewriter.

When Presley asked Tracey Mooneyham if she, as a member of the board, had a copy of the bylaws, she responded with “I bet it’s somewhere.” Other board members shook their heads, saying they did not have a copy.

Presley then called John Davis, president of the Punkin Water Association, to the witness stand to allow him to answer questions and address the statements made by the customers. Frank Farmer, general counsel for PSC, questioned Davis on a variety of fronts, including a vacant board seat the association hadn’t advertised, inadequate notification of meetings, sporadic meetings, lack of copies of bylaws for board members and customers who desired to read them and a lack of boil water notices. The association is in the process of creating a website, but did not provide a definitive answer as to when it would be up and running.

The one thing Farmer and Presley didn’t question, however, was the paycheck Davis draws as both board president and one of the main employees of the association. Although he said he doesn’t agree with the law, Presley pointed out that the state of Mississippi has no law against serving on a water board, which is a voluntary role, while also being a paid employee in a separate capacity.

Punkin Water Association serves several subdivisions, including the Lakes, Tuscan Hills and Highlands, and there is more development in the near future. When asked if the association, which implemented its newest well in 2011, could provide the amount of water needed to service those households – quality notwithstanding – Davis’ response caused murmurs in the audience.

“[The wells] can’t handle the entire demand when it gets drier weather,” Davis said.

The proposed solution, at least the one that was deemed the most feasible by both Presley and the Punkin water board, was to purchase water from the city of Oxford for use in Punkin.

In a letter dated May 15 and presented at last night’s Oxford Board of Aldermen meeting, Punkin Water Association proposed entering into an agreement with the city of Oxford via a “master meter connection,” with current levels indicating a purchase of between 50,000 and 250,000 gallons of water per day. This request was approved last night by the Board of Aldermen, pending financial discussion and contracts.

When public works director Bart Robinson was asked for a potential timeline for this agreement, he said things would be fixed “best case, end of the year, but realistically, this time next year.”

The one thing no one disagreed with about was, there is a problem.

After nearly two hours of questioning and testimonies from customers, consulting engineers and all board members present, Presley and the legal team took a 15-minute recess to discuss the final order for the night.

After weighing the evidence, Presley announced they had decided to allow Punkin Water Association to keep their certificate of public convenience and necessity, with a few conditions. Those conditions, due May 22, are: the board shall determine and set a time, place and date for board meetings to be scheduled and provide adequate notice for the next six months; provide a copy of updated bylaws to all members who request one and all new members going forward; report to the commission all details relating to the proposal with the city of Oxford; beginning June 1, provide the PSC with updates and construction estimates; the association shall identify steps for resolution regarding water quality within two weeks and the association should notify the PSC of the progress of website development and its completion.

Some city employees now allowed to carry gun while…