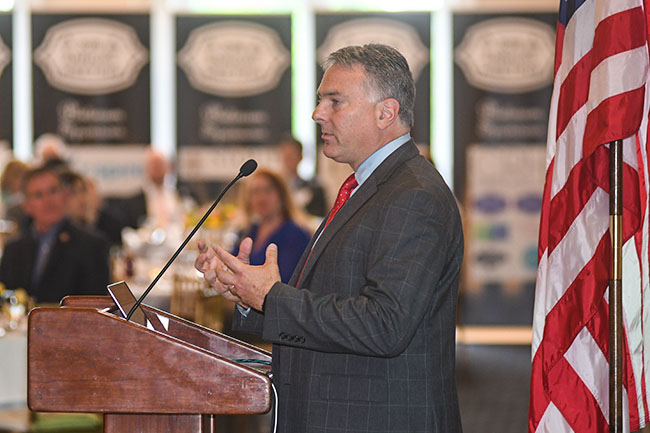 Jon Maynard speaks at the Oxford-Lafayette County Chamber of Commerce & Economic Development Foundation's annual meeting, at the Inn at Ole Miss in Oxford, Miss. on Wednesday, May 16, 2018. (Bruce Newman, Oxford Eagle via AP)

During the Oxford-Lafayette Chamber of Commerce and Economic Development Foundation Annual Meeting at The Inn at Ole Miss on Wednesday, CEO and president Jon Maynard presented numbers and statistics to show how Lafayette County and the chamber grew in 2017.

The estimated county population at the end of 2017 was 54,374, making it the highest growth rate in the state.

According to Maynard, 1,590 jobs were created in 2017, making it the largest annual job growth number on record for the county. The annual average unemployment rate was 4.2 percent. However, those who were working made an average annual wage of $39,950, which is $2,443 more than the Mississippi average.

People in Lafayette County, which includes the city of Oxford, and those who visit, like to shop, according to Maynard.

The chamber ended 2017 with 682 members, gaining 90 new members during the year. The chamber hosted 44 ribbon-cutting ceremonies and held 219 events.

On social media, the chamber has 9,532 followers.

Part of Oxford and Lafayette’s success, Maynard said, are the area’s two school districts which rank in the top 15 percent in the state.

“People come here because we have great schools and people stay here because their kids are in good schools,” he said.

Haynie described as a humble man who gets things…