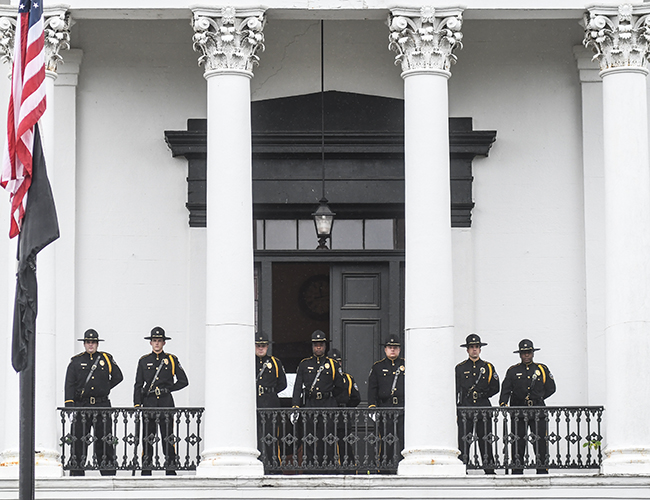 The Oxford Police Dept.'s Honor Guard stands at attention at the Peace Officer Memorial Day commemoration at the Lafayette County Courthouse in Oxford, Miss. on Thursday, May 17, 2018. The ceremony was moved indoors due to rain. (Bruce Newman, Oxford Eagle via AP)

The annual Peace Officer Memorial Service was held Thursday inside the Lafayette County Courthouse. Each year, officers from local, state and federal offices gather with citizens to remember those police officers and K9s who died in the past year.

After Perry Arrington sang the national anthem, Mayor Robyn Tannehill and Lafayette County Supervisor Mike Roberts welcomed those attending the service and thanked all the law enforcement officers for their service.

Nationally, Peace Officers Memorial Day is recognized on May 15 and is part of Police Week, an observance that pays tribute to the local, state and federal law enforcement officers who have died, or who have been disabled, in the line of duty.

Guest speaker, the Rev. David Ard, who is also a retired from the Mississippi Highway Patrol, presented some chilling statistics. In 2017, 128 police officers were killed in the line of duty nationally. Of those, 44 were killed by gunfire.

From January to May this year, 51 officers have been killed with 28 of the deaths caused by a firearm.

Ard said one of the hardest things for a law enforcement officer has to do is control their temper.

“You’re dealing with someone who violated the law and has a deep, seeded hatred for your badge and says it to your face but you have to remain civil,” Ard said. “But we can be a blessing … when people are in trouble, they are relieved to the see the police show up.”