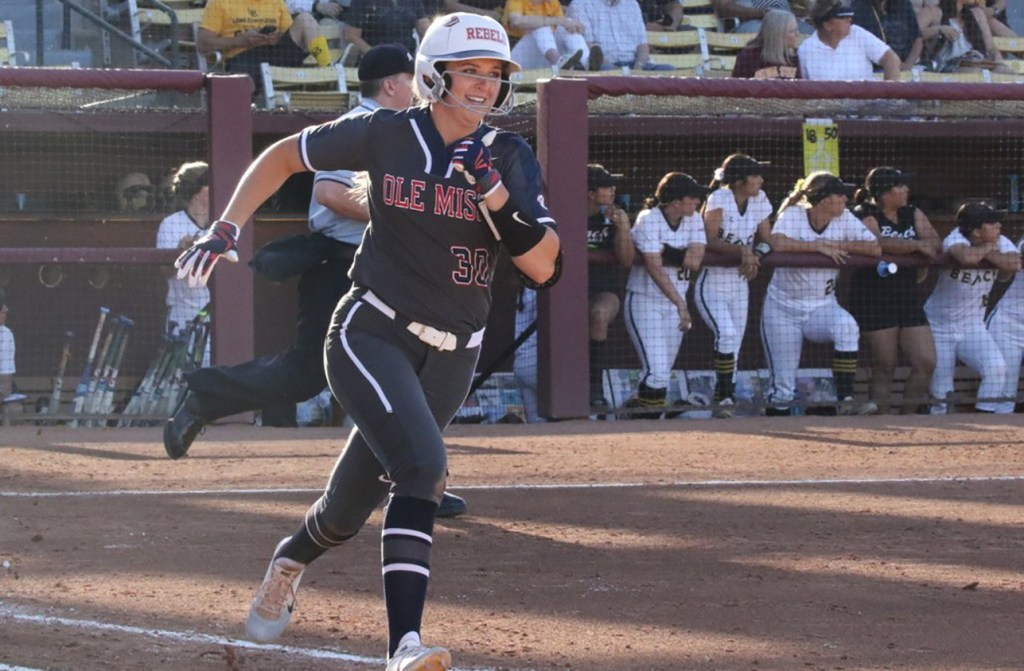 Ole Miss' Abbey Latham runs to first base during a game against Long Beach State in the Tempe Regional on Friday in Tempe, Ariz. The Rebels won 9-1. (Ole Miss Athletics)

Behind a pair of home runs from Abbey Latham, Ole Miss won its NCAA Tournament opener 9-1 over Long Beach State on Friday in the Tempe Regional. The Rebels scored nine unanswered runs from the third inning on to turn a deficit into a rout.

Ole Miss (31-23) advanced to face host Arizona State in the winner’s bracket today at 4 p.m. CT for a spot in the regional finals after the Sun Devils beat New Mexico State. It’s a rematch of an Oxford Regional matchup last season, which the Rebels won 2-0.

A lack of timely hitting and spotty defense plagued Ole Miss throughout the regular season, but the Rebels played clean behind Kaitlin Lee outside of a two-error second inning that allowed Long Beach to take a 1-0 lead. Lee (17-12) blanked Long Beach (42-13) in her other five innings of work, combining with Ava Tillmann to limit Long Beach to five hits.

Ole Miss finished with nine hits and produced 14 baserunners, stranding just five of them. The Rebels used three walks and pair of errors to plate three runs in the third without a hit before Latham found her unlikely power stroke to put the game out of reach.

Latham, who came in with just four homers all season, hit a solo shot in the sixth before launching a two-run shot to center as part of the Rebels’ five-run seventh. The freshman finished 3-for-4 while Kylan Becker also had three hits and scored twice. Brittany Finney, Autumn Gillespie and Gabby Alvarez each drove in a run.

Cielo Meza (22-5) took the loss for Long Beach after yielding a pair of unearned runs on three hits in 2 ⅓ innings.