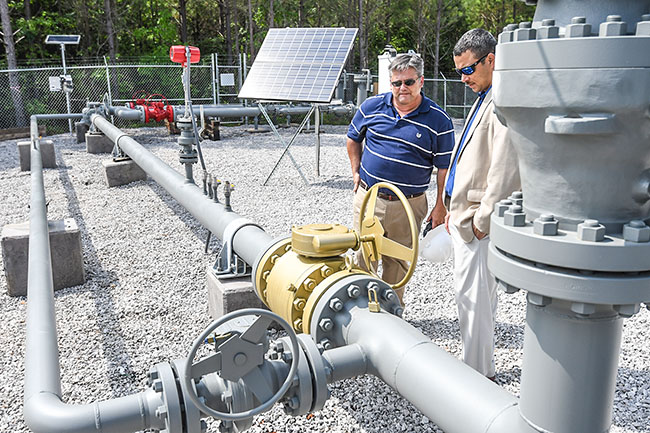 CenterPoint Energy opened up a new era for its customers in the LOU community during an official valve turning ceremony at the Denmark Regulator Station.

According to public service commissioner Brandon Presley, adding the station in Denmark is a $16 million dollar investment that will bring service to around 400 new or existing customers in Lafayette County. It will also provide “redundant service” to those in Oxford who already use natural gas.

Previously, there was only one natural gas pipeline to service Oxford and a limited area outside of city limits. This pipeline was built in the 1940s and runs west, under Sardis Lake. While Presley and officials from CenterPoint say this old pipeline is safe, having a new one to alleviate some strain as well as service a bigger area is an asset.

“This is about growing infrastructure in a matter that makes economic sense but also brings services out to areas that lack them,” Presley said. “If Phil Bryant can have natural gas services in the governor’s mansion, the people of Denmark should have it also.”

The new pipeline is 12 inches in diameter and 13 miles long. It taps into a pre-existing interstate natural gas pipeline that, until yesterday, only served the purpose of transporting natural gas through the state without bringing the resource to potential customers in Mississippi. Mississippi has 10,000 miles of natural gas pipeline and, according to Presley, the Denmark Regulator Station is just the first of more to come throughout all 82 counties in the state.

District 1 Supervisor Kevin Frye, who was in attendance at the valve turning ceremony, said bringing natural gas to more people in the county is something the board of supervisors had been working toward for a long time.

“We know that we’re growing, no doubt about that. And we also know that the residents of Lafayette County are very interested in our natural gas services,” Frye said. “As a part of our comprehensive planning process, we asked, ‘What is it you’re interested in?’ and natural gas was one of the top services requested by rural county residents.”

Research has shown that natural gas can also be a cost-saving measure. It burns cleaner than other fossil fuels, eliminates the need for an underground storage tank, is non-toxic if inhaled in small amounts and, in the event of bad weather, is more reliable than electricity.

For many rural customers, the cost-saving benefits are a big draw, according to Presley. In terms of heating costs alone, he said, it can cut one household’s heating expenses by 50 percent.

“We’re one of the top states in the nation to afford natural gas infrastructure. My goal, working with the state and county, is to take that infrastructure and bring it to the folks who lack it,” Presley said. “We have the lowest per capita income of any state. We know, if we can bring natural gas to these residents, it really has a profound impact on the cost of living.”

While the Denmark station is expected to bring service to a large amount of the population, both Presley and CenterPoint officials said the process will not be overnight. In addition to providing natural gas to Denmark and Oxford residents, the pipeline will also service parts of Taylor, where natural gas was previously unavailable.

To determine interest in natural gas for potential customers, as well as notify them the service is available, workers from CenterPoint Energy will be conducting a survey of every household in the service area.

Jason Fabre, district director for Centerpoint Energy, said the project has been completed with the utmost care, and he has high hopes that any expansions will follow suit.

“We’ve gone about eight years now with no preventable accidents,” Fabre said. “Taking on a project of this scale involves a lot of liability, but our goal is to reliably serve the citizens in the Oxford area.”