With national seed in sight, No. 4 Ole Miss playing it cool ahead of SEC Tournament 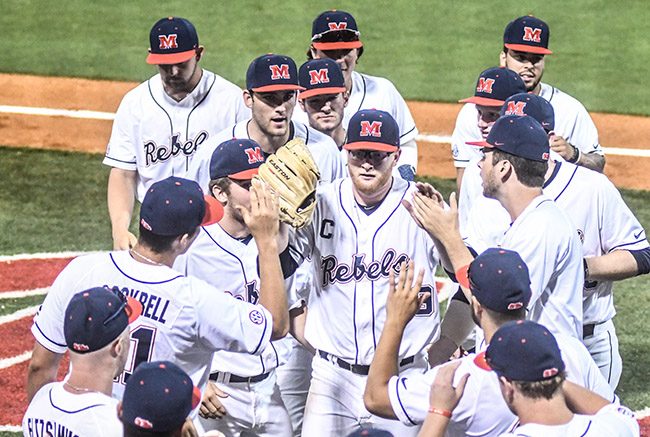 Ole Miss Brady Feigl (39) is congratulated by teammates after being relived in the 9th inning against Auburn at Oxford-University Stadium in Oxford, Miss. on Friday, May 11, 2018. (Bruce Newman, Oxford Eagle via AP)

Like most coaches whose teams are in Ole Miss’ position, Mike Bianco reeled off a list of reasons why he believes the Rebels’ resume is strong enough to warrant a national seed in next week’s NCAA Tournament even before playing a game in Hoover.

A Western Division championship in arguably the nation’s toughest college baseball conference. A top-10 RPI (9). Seven series wins — second-most in the SEC only to No. 1 Florida’s nine — that include No. 7 Georgia and No. 8 Arkansas. Thirteen road victories. A strong finish that included three series wins over the last four weekends and a 7-3 record in the final 10 games.

“You always feel like you’re campaigning this time of the year, don’t you?” Bianco said with a grin.

All of that may be enough, but the Rebels still might need a win or two in the SEC Tournament to feel good about it. No. 4 Ole Miss (42-14) will start Wednesday at 1 p.m. against either No. 24 Auburn (37-19) or Kentucky (34-21) in the double-elimination portion of the bracket with 18 league wins. Only once since 2002 has an SEC team earned a top 8 seed in the NCAAs without 20 league wins counting the conference tournament.

A national seed would allow Ole Miss to host a super regional if the Rebels get that far, something they haven’t done since 2005.

“It’s all on our minds,” catcher Nick Fortes said, but that doesn’t mean the Rebels are putting any extra pressure on themselves. Bianco said it’s a trait that’s developed with his team over the course of a season that’s been littered with high stakes.

“Control the controllables and all those things, but it’s much easier said than done,” Bianco said. “But these guys, they enjoy playing. They play the game really well. You don’t really know that until you get going, but this deep into it, I don’t think they’re scoreboard watching. They’re just trying to do their job, and I’m proud of them for that.”

A series win over Arkansas in late March catapulted Ole Miss into the top spot in the division standings and into a season-long tussle with the Razorbacks to stay there. Back-to-back series losses to Mississippi State and Vanderbilt put the Rebels a game above .500 in league play at the midway point, but Ole Miss answered with series wins over Georgia and LSU before dropping two of three at South Carolina, leaving the Rebels a game back of Arkansas atop the division standings with just two weekends left.

That set up a crucial home series with Auburn for a team with more than half its lineup made up of underclassmen, but Ole Miss looked more polished than pressed. The Rebels built a 5-1 lead through six innings of a series-opening win before the SEC’s second-leading offense knocked around projected No. 1 overall draft pick Casey Mize for six runs in five innings, setting the tone for a sweep that strengthened their national seed hopes and kept them within striking distance in the West.

Alabama gave Ole Miss all it could handle despite its 7-20 SEC record going into last weekend, earning a split in the first two games to force a deciding final day of the regular season for the West title. Arkansas’ series loss to Georgia opened the door for Ole Miss to win its first since 2014, but the Crimson Tide made things interesting by cutting into Ole Miss’ four-run lead with a pair of runs in the eighth and putting the tying run on in the ninth against Parker Caracci.

But Ole Miss’ closer came through again in one of the many high-leverage situations he’s faced this season, striking out the last two batters to save the Rebels’ 10-8 win. It not only clinched the division championship but also gave Ole Miss the best overall record in a league that could have double-digit teams in the field of 64.

It’s four months worth of confidence that’s been instilled regardless of the situation.

“We know if we play our best baseball, we can beat anybody,” Fortes said. “There’s no pressure on our end. We just go out there, play good baseball, be confident and not timid. Go out there and have some fun. We know we can hang with anybody in the nation.”

The Rebels aren’t just out to further strengthen their case for a national seed in Hoover. They’re trying to leave no doubt.

“Go and win it,” outfielder Will Golsan said. “That’s what our goal is. We got the SEC West, so now the next goal is to go win the SEC championship.”

No. 5 Ole Miss holds off Alabama to win…