A lifetime of music – Violinist Irwin Bell retires from teaching 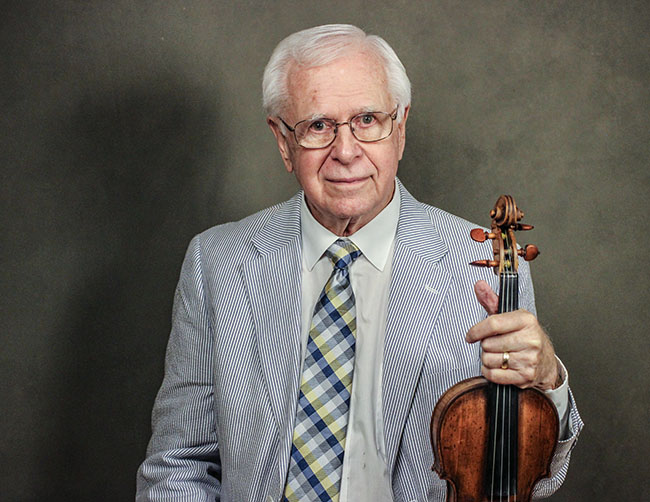 Bell held his final student recital on Mother’s Day, but behind the performances of his last group of students is a lifetime of music.

Music is something Bell said has taken him many places in his 89 years on the earth. Born in Tacoma, Wash. in 1928, he was first exposed to the violin in grade school.

“When I was in grade school, we had a fine string instrument program in Tacoma. Our singing teacher saw that I had a good ear and I loved music, and she recommended I take violin,” Bell said. “Well, that excited me, but my parents said, ‘Well, I don’t know if we’re going to do that.’ So I gave up the idea, but then in the sixth grade, something happened in my mother’s bridge class.”

After his mother heard a friend’s child play poorly during a bridge game, Bell said his parents changed their minds and allowed him to take violin lessons. The year was 1939, and the lessons cost $1 apiece. After sticking with it for a year, his teacher spent $15 on a new violin to reward him for his hard work.

Bell went on to graduate from Wheaton College and obtain a master’s degree from Northwestern University. In his professional life, he started out as a choral director in the suburbs of Chicago. At the time, however, he’d set his violin aside.

After a car accident placed him in a full-body cast, Bell was deemed ineligible for the draft as a young man and suffered from severe nerve damage. Two decades and a back surgery later, he said he decided to pick it back up, when something remarkable happened.

“Because of the back surgery, I had problems with the nerves in my left hand, so for about 20 years, I didn’t play at all,” he said. “The doctor said it would never come back, but it did. And the more I played, the more it began to restore itself.”

In 1988, Bell’s longtime friend and former Ole Miss Concert Singers conductor Jerry Jordan invited him to come to Oxford and be an assistant choral director. He took an early retirement after teaching in Park Ridge, Ill. for 24 years and agreed to head down South.

It was through the Ole Miss choral program that he met his wife of nearly 21 years, JoAnn. Jordan introduced the two at a choral performance, and Bell said they’ve been inseparable ever since.

“After the recital, we went out to Shoney’s, which, at that time, was the only place you could get any kind of food in the evening,” Bell said. “I got a piece of very thin apple pie, the worst apple pie I’ve ever had. Afterward, Jerry said, ‘Irwin, JoAnn needs a ride back to her place. Would you mind taking her?’ and that’s when it all started.”

Bell began teaching private violin lessons in 1993, and estimates that more than 400 students have walked through his door throughout the years. His students, some of whom began learning violin as young as age three, have gone on to attend college on scholarships for their musical talents.

At times, Bell said he had as many as 32 lessons a week, six days a week. In addition to lessons, he also was a member of symphony orchestras in Little Rock, Ark., Jackson, Tenn. and Tupelo. Now that he’s stopped, he said he’s noticed a void in his daily activities.

“For the 25 years I taught violin, I loved it,” he said. “I have been lost without those kiddies coming in the room.”

Even though he’s officially retired, that doesn’t mean Bell has any plans to slow down. He said he’s looking forward to playing more, learning some new music and working in his yard.

The very last recital was something Bell said was bittersweet. Seeing his students find joy and success in playing violin, just as he did almost 80 years ago, is worth it.

“It makes you feel like your time has been well spent,” Bell said. “I’ve never had anybody leave me to go to another teacher, so that must mean they appreciated what I was doing for them. I can’t think of any kids that I’ve had that weren’t enthusiastic about what they were doing.”

His students, he said, showed their appreciation in an unexpected way at the recital. Traditionally, Bell gives each of his senior students a picture frame to commemorate their accomplishments. For the final year, he said he’d planned to sing the Billie Holiday classic “I’ll be Seeing You” as an appropriate farewell. Before he could sing, however, the students planned their own thank-you for their instructor.

“After I gave them the pictures, Andrew Gardner, one of my students, turned to all the kids, young and old, 25 of them, and he said ‘Alright, let’s go,’ and they played Twinkle Twinkle Little Star. That’s the first song any of them learned to play with me,” Bell said. “I was so surprised at that. I was going to sing the song ‘I’ll be Seeing You,’ but I couldn’t, because I was afraid I’d start crying.”

While he’s stepping aside as a teacher for good, Bell said he still plans to share his musical gift every Wednesday, and some Sundays, at Saint Peter’s Episcopal Church, where he’s been a member for years.