No. 4 Ole Miss survives late gaffe, rallies past No. 7 Georgia to advance in SEC Tournament 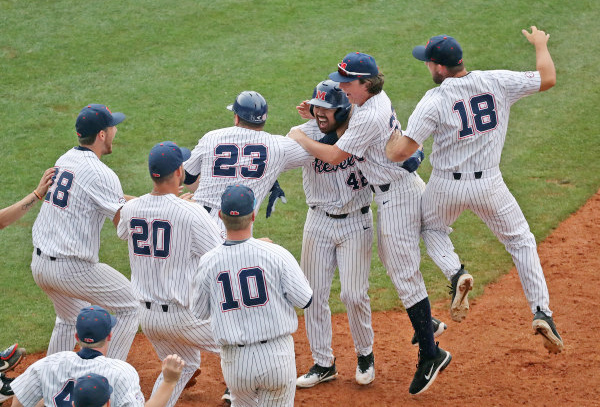 HOOVER, Ala. — Parker Caracci has picked up Ole Miss’ offense on countless occasions this season, usually multiple innings at a time.

With the Rebels staring elimination in the face at the SEC Tournament, Caracci needed Ole Miss’ bats to pick him up.

Following a lengthy weather delay and a late error that left players, coaches and fans inside Hoover Metropolitan Stadium perplexed, they did. No. 4 Ole Miss rallied for two runs in its final at-bat, the last coming on a walk-off single from Tim Rowe, to advance in the tournament with a 5-4 win over No. 7 Georgia in 10 innings.

“A crazy game,” Ole Miss coach Mike Bianco said. “For those that don’t understand when you say, ‘Hey, it’s just baseball,’ this was probably the perfect example. Just proud of our guys for the way we hung in there.”

Georgia (37-19) will head back to Athens awaiting word on a likely national seed when the top 16 seeds for the NCAA Tournament are announced Sunday night. Meanwhile, the Rebels (43-15) will face either Auburn or Texas A&M in another elimination game Friday at 3 p.m. looking to further strengthen their case for a top 8 seed. Ole Miss, which now has 19 conference wins and 10 against the RPI top 25, was sent to the loser’s bracket with a loss to Auburn on Tuesday.

“Every game is important,” said Rowe, who was a late addition to the lineup after third baseman Tyler Keenan was scratched after injuring his hand during batting practice. An X-ray didn’t show any broken bones, but Bianco said he’s unsure of Keenan’s availability for the rest of the tournament.

Ole Miss led 3-1 after seven innings on the strength of a quality outing from Brady Feigl, who limited the Bulldogs to a run on three hits before Mother Nature intervened. The junior right-hander walked just one, struck out three and was a pitch away from getting through the seventh when play was suspended 1 hour, 53 minutes because of heavy rain and lightning in the area.

Bianco turned to Caracci when play resumed to try for another multi-inning save, which more than half of his 10 saves this season had been. Caracci (4-2) punched out Cam Shepherd to finish the seventh before allowing back-to-back hits to LJ Talley, who had half of Georgia’s six hits, and Tucker Bradley to start the eighth.

Caracci got two of his six strikeouts on the next two batters and looked as if he’d escaped the jam when he got Aaron Schunk to hit a tapper back to him. But instead of taking the out at first, Caracci went home and airmailed his throw to the backstop, allowing both runs to score for a 3-3 game.

“The first thing is you’re just curious as to what was going through his head, but you never know,” outfielder Thomas Dillard said. “Baseball is just a tough game, a weird game.”

Said Bianco, “I don’t have the answer on why it happened.”

Caracci and Schunk (2-2), who held the Rebels scoreless in his first two innings of relief, matched zeros in the ninth before Talley took Caracci deep in the top of the 10th to give Georgia its first lead. Caracci scattered three hits and struck out seven in 3 1/3 innings.

That put the onus on the offense for the Rebels, who got to Georgia’s Chase Adkins for seven hits through the first five innings but held just a 2-0 lead at the time thanks to a leadoff homer from Grae Kessinger and an RBI single from Chase Cockrell.

Nick Fortes led off the home half of the 10th with a single before Thomas Dillard plated him with a double down the right-field line. Schunk fanned Cole Zabowski and got Will Golsan to fly out to bring up Rowe, who took a pitch before sending Schunk’s 1-0 offering back through the middle, allowing Dillard to race home with the winning run.

“I knew they had the shift on me, so my approach was to stay middle-away,” Rowe said. “I got a changeup and waited back as long as I thought I could and luckily I got a little bit of bat on it and got it through.”

The Rebels were just 1-for-9 with runners in scoring position before Rowe delivered the Rebels’ 18th comeback win of the season — one that meant a little more than most.

“That’s what a team is all about,” Dillard said. “You’ve got to have people to pick people up whether it’s a starter, somebody off the bench or a reliever. You’ve got to go pick somebody up if they make a mistake.”

With national seed in sight, No. 4 Ole Miss…