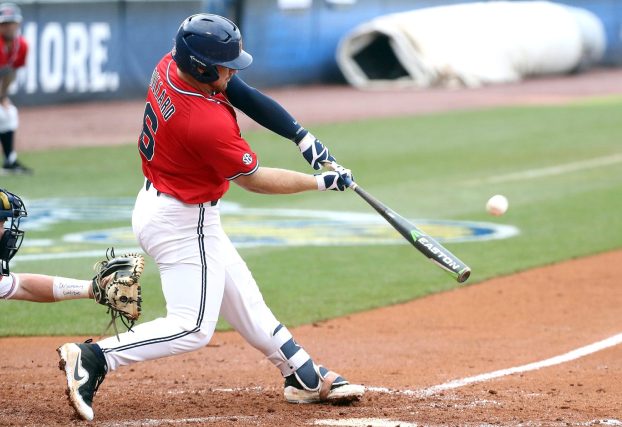 Complete effort sends No. 4 Ole Miss past No. 24 Auburn, into SEC Tournament semifinals

HOOVER, Ala. — Ole Miss got length out of James McArthur and his relief.

Combined with an offensive surge in the middle innings, it helped the fourth-ranked Rebels get revenge on No. 24 Auburn on Friday and possibly sew up a national seed in the process.

McArthur put together his longest outing in more than a month, combining with Ole Miss’ bullpen to blank Auburn for a 7-0 win at Hoover Metropolitan Stadium that has the Rebels a win away from their first SEC Tournament championship game appearance since 2008. Ole Miss, which avenged a 9-3 loss to the Tigers in its tournament opener Wednesday, will take on Texas A&M in the semifinals Saturday at noon (SEC Network).

Midweek starter Jordan Fowler will get the ball for the Rebels (44-15), who waited out a lengthy rain delay for the second straight day to notch their 11th RPI top-25 win and an important 20th against SEC competition, further strengthening their case for a national seed. Only once since 2002 has an SEC team had 20 league wins and not been a top 8 seed in the NCAA Tournament.

“Just proud of the way our guys have played,” Ole Miss coach Mike Bianco said. “It’s so difficult the field every year but even moreso this year because of so much rain and the second day in a row where we’ve had to sit for a couple of hours. Our guys have been able to come back from that and play well.”

The tone for Ole Miss’ first tournament shutout since 2012 was set by McArthur (6-0), who hadn’t made it through five innings in any of his previous four starts but showed better fastball command against an Auburn team that entered the tournament leading the league in runs per game. The junior right-hander scattered five hits, worked around a hit batter in the first and his only walk in the third and struck out six in 5 ⅓ innings — his longest outing since going six against Georgia on April 21.

Auburn’s lone extra-base hit against McArthur came on Josh Anthony’s one-out double in the fifth that turned the lineup over for the Tigers (39-21), but McArthur got a flyout and a groundout to squash the threat. He retired 10 of 12 batters at one point before one-out singles from Brett Wright and Edouard Julien in the sixth ended his night.

“I got into a good rhythm the second through the fifth and just seemed like I could hit both sides of the plate with my fastball and throw the breaking ball when I needed to,” McArthur said. “It was huge. I had a really good feel today.”

Said Bianco, “Everybody knows he’s going to throw the fastball. It’s no secret, but it’s that dominant when he can locate it. It was dominant tonight.”

McArthur dueled early with Auburn lefty Andrew Mitchell (2-2), who racked up a career-high nine strikeouts and held Ole Miss hitless until the fourth when the Rebels broke through on Thomas Dillard’s two-run homer to center. The Rebels chased Mitchell in the sixth when Cole Zabowski followed Dillard’s one-out walk with an RBI double into the left-field corner and made it 4-0 on a groundout from Tim Rowe, who was in the lineup for the second straight game with third baseman Tyler Keenan still not able to go with an injured hand.

Chase Cockrell and Jacob Adams also hit solo homers as the bottom third of the order drove in three runs. Nick Fortes had Ole Miss’ first hit with a single in the fourth and went 2-for-5 with an RBI while Zabowski also finished with two hits.

“We have guys all throughout the lineup that get the job done,” Zabowski said. “But Nick’s a big leader in our lineup. When he gets it done, people follow him.”

Freshman Max Cioffi thwarted Auburn’s last real threat when he came on for McArthur and got Jay Estes, a .329 hitter, to fly out and Conor Davis swinging to end the sixth. Cioffi, who’d thrown just 10 ⅓ SEC innings all season, worked three hitless innings for his second-longest outing of the season and didn’t allow a baserunner until plunking Judd Ward with one out in the ninth.

Cioffi and Austin Miller, who needed just 10 pitches to end it with back-to-back strikeouts, helped preserve the Rebels’ bullpen. Bianco said every reliever other than Cioffi and Parker Caracci, who threw 3 ⅓ innings against Georgia on Thursday, will be available against Texas A&M, which has yet to lose in the tournament.

“We’ve got enough,” Bianco said. “The guys who go out there have to get outs.”

No. 4 Ole Miss survives late gaffe, rallies past No. 7 Georgia to advance in SEC Tournament