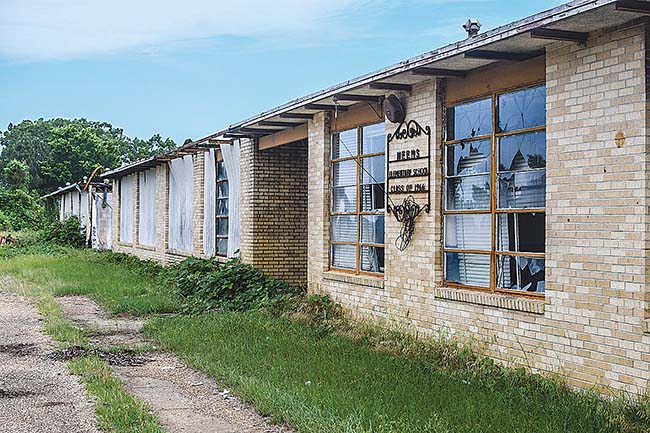 The Lafayette County Board of Supervisors recently voted to accept bids to demolish the Weems Elementary School building in Taylor, but the school’s history will live on through those who taught and attended school there.

One such school was Weems Elementary, located half a mile from the current Taylor Community Center, on County Road 343 in Taylor. The school was named after its principal, M.W. Weems, and taught African-American students from first through eighth grades from 1961 to 1969.

One person carrying on the school’s legacy is Eulastine Martin Thompson. Thompson, a Taylor native who began teaching at age 20, taught at Weems for a year and a half before being transferred to Lafayette High School in spring 1970. A product of the African-American Taylor Vocational High School and Oxford’s Central High School herself, Thompson said Weems operated like any other school, and what they lacked in material goods, they made up for in quality teachers.

“It was just like any other school,” Thompson said. “The only thing, they didn’t have as many supplies and things like that. But they had good teachers, and the teachers transferred to Lafayette when integration happened.”

Part of desegregation in Lafayette County was trading teachers, Thompson said. A group of white teachers and a group of black teachers were selected by the school district, and each group spent time teaching at the other’s school.

The transition out of segregation is one Thompson said was relatively easy, compared to what she’d lived through during her time at Central High School in 1962, when riots erupted on the Ole Miss campus and at the Square after James Meredith became the first black man to enroll in the university.

“On a Monday morning, they bussed us into Central. There was such a crowd around the Square, and it looked just like ice, but it was glass, where bottles and stuff had been broke,” she said. “They weren’t going to let the bus go through, so our bus driver said, ‘All of y’all lay down on the seat and cover your head. I’m gonna put the gas to it, and if they don’t move out the way, I’m gonna have to hit them. We’re going on through.’ And they spread like the Red Sea, and let that bus pass.”

By the time school ended that day, Thompson said troops were called in to ride the bus back to Taylor for the black students’ safety. She’d later discover the officers had patrolled the schoolyard, arresting men who were threatening students with guns and gasoline and matches. Classes didn’t resume at Central for two more days.

With that experience in the back of her mind, Thompson admits that while she was proud to have been selected to teach at Lafayette, she was unsure about the white students’ reactions to having a black teacher.

“When we went over there, the students were okay, but nobody would talk to us but the principal,” Thompson said. “The faculty was not friendly. So, we dealt with that. It was an adjustment for them to have a black teacher, and for me to have white students. But we got along fine and didn’t have any problems.”

Lafayette already had a small number of black students, thanks to the Freedom of Choice Act. But, reflecting on the way she was treated in the beginning as an adult, Thompson said she knows those students had it worse than she did when they first started.

Shirley Carothers, another teacher from Weems and Thompson’s cousin, worked at the school in the fall of 1969. Like her cousin, Carothers is a graduate of Taylor Vocational High School. Telling the story of segregation-era African-American schools is something Carothers said is close to heart.

“I think that history should go on. The younger people should know what the older people went through for them to have the privileges they have today,” Carothers said. “After integration, all of the black schools completely disappeared.”

Carothers said she recalls sitting in one of the first schools that Taylor’s black community members banded together to construct, completely aware of the differences between her classmates and those at the white schools. The books, she said, are what she remembers most, because they were never new; instead, they were hand-me-downs from the white schools.

However, Carothers said she’s proud to be a product of a black school.

“If it was not for the black school, I would not be where I am today. That’s where I got my start,” she said. “Even when we were segregated, times were hard, but among the blacks, there was still a lot of love. And I have to admit, even during segregation there were some white people who showed love to blacks as well.”

Taylor’s African-American population has been an active presence in the community for more than a century, beginning with Thompson and Carothers’ great-grandfather, Commodore Martin.

Martin was the child of slaves from North Carolina. He made his way to Taylor as a young man, where he bought land, married Susan Toles Martin, and had 16 children. His story, Thompson said, is one that started her family on a path toward education.

“Commodore came here from South Carolina, with, they say, a silver coin. And one of the white families took him in, because I guess they thought he was white. But he really was what they call a mulatto,” she said. “He made sure all his children had property. Just about all of Taylor was his land.”

According to Thompson’s research and land records from the time, nearly 8,000 acres in and around Taylor were owned by African-Americans, with the majority in the hands of the Martin family, as well as the Egerson family.

Thompson’s grandfather put the first money down for Taylor’s first black school, which started out as a one-room schoolhouse and was expanded as local cotton farmers were able.

At its peak, the African-American schools in Taylor had nearly 700 students, who came from within the city limits as well as from the unincorporated outskirts of town. In honor of their forefathers, Thompson and a group of fellow educators created the Clear Core Scholarship in 1997. Students from Oxford and Lafayette High Schools are eligible, and if selected, receive $500 every semester for all four years of college. This year, Thompson and the committee were able to name eight students as recipients.

The Weems Elementary School building, which operated as a Head Start preschool center before being vacated, was partially burned earlier this year. The building itself is condemned, but Thompson said the building is just that – a building.

To commemorate their time at Weems and Taylor Vocational High School, the remaining classmates and teachers from both Weems Elementary School and Taylor Vocational School are preparing for their triennial school reunion on July 6 through 8. Five teachers from Weems are still alive, and Thompson said they’re all making it a point to come from as far as Memphis and Alabama to attend.

The reunion, Carothers said, is a chance to gather and reflect on progress made and where to go next.