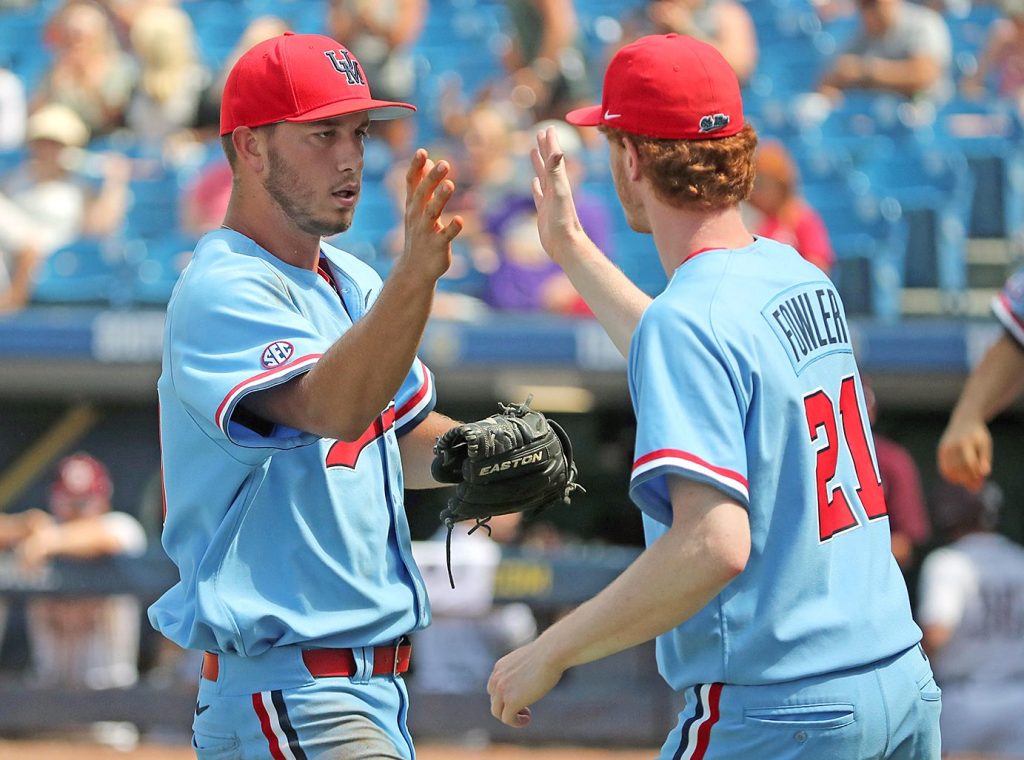 Ole Miss' Will Ethridge, left, is congratulated by Jordan Fowler after an inning during an SEC Tournament semifinal game against Texas A&M on Saturday at Hoover Metropolitan Stadium in Hoover, Ala. The Rebels won 2-1. (Petre Thomas/Ole Miss Athletics)

HOOVER, Ala. — Mike Bianco’s plan to piece together enough pitching to give Ole Miss a shot at reaching its first SEC Tournament championship game in a decade included going to Will Stokes early, using Will Ethridge in the middle innings and finishing with Greer Holston.

Thanks to the best outing of Jordan Fowler’s young career, the Rebels’ coach never had to worry about it.

Fowler held Texas A&M scoreless over a career-long six innings, Ethridge went the rest of the way, and No. 4 Ole Miss advanced to the SEC Tournament championship game with a 2-1 win Saturday at Hoover Metropolitan Stadium. The Rebels (45-15), who are back in the tournament final for the first time since 2008, will take on either LSU or Arkansas on Sunday at 2 p.m. looking for their first SEC Tournament title since 2006.

“Sometimes I think you don’t look at same way because you’re in it, but it had to be heck of game to watch,” Bianco said. “Certainly the story for us is Jordan and the way pitched against a good team in Texas A&M.”

Ole Miss led 2-0 until the eighth when A&M (39-20) used a two-out error by Ryan Olenek and a pair of singles to cut into Ole Miss’ lead. The Aggies threatened for more when Ethridge walked Chandler Morris to load the bases, but Ethridge got Allonte Wingate swinging on a full-count offering to preserve the Rebels’ lead before retiring A&M in order in the ninth for the nine-out save with Parker Caracci unavailable after throwing 3 ⅓ innings two days earlier.

“He’s one of our dudes on the back end,” Bianco said of Ethridge, who allowed just four hits with nine strikeouts in three appearances against A&M this season. “We needed him today, and he came through for us.”

Ole Miss had plenty of chances to expand its lead with 10 hits and 13 baserunners, but Cole Zabowski’s RBI groundout and an RBI single from Will Golsan in the fourth were all the Rebels mustered against A&M’s Mitchell Kilkenny (8-4), who scattered eight hits and struck out seven in six innings.

But Fowler was even better.

The Rebels’ midweek starter had not gone deeper than five innings in a start this season and went just 3 ⅓ frames against Mississippi State on April 24 in his only start against an SEC opponent. But Fowler (7-0) kept the trend of strong starting pitching going — Ole Miss’ starters have combined for a 1.08 earned run average in 24 ⅓ tournament innings — keeping the Aggies’ hitters off balance with a three-pitch mix to the tune of six hits, three strikeouts and one walk over six innings.

“My approach was basically to be confident, trust my stuff and have the belief that I know this is what I’m best at doing,” Fowler said. “I’m just going to prove that I can do it.”

Said Bianco, “A&M can be aggressive at the plate, and I thought (his changeup) was the equalizer to keep them off his fastball. He’s a star in the making. He’s going to pitch on the weekend here before he’s done.”

Morris’ leadoff single in the seventh chased Fowler and was the only hit the freshman left-hander allowed after the third, and he faced the minimum in half of his innings with some help from his defense. A&M threatened to break a scoreless tie in the second after Logan Foster’s one-out triple, but Olenek, playing third for the third straight day with Tyler Keenan still nursing a wrist injury, snagged Hunter Coleman’s grounder and threw him out at home.

“He was just filling up zone all day,” Olenek said. “Throwing every pitch right where he wanted to, and that makes it very easy on your defense to stay locked in when you’re not falling behind in counts.”

Designated hitter Chase Cockrell was hit on the hand by a pitch in the third but stayed in the game. Keenan’s status is still day-to-day.

Complete effort sends No. 4 Ole Miss past No.…