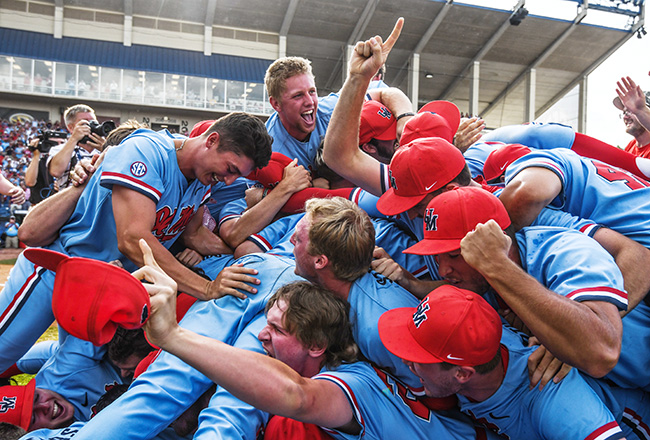 Ole Miss vs. LSU in the championship game of the SEC Tournament at the Hoover Met in Hoover, Ala. on Sunday, May 27, 2018. Ole Miss won 9-1. (Bruce Newman, Oxford Eagle via AP)

HOOVER, Ala. — If Ole Miss was going to finish its SEC Tournament run with a championship, the Rebels were going to have to do it against the team that’s become synonymous with doing that.

After finishing the regular season with a .500 league record, LSU entered the week needing some wins to solidify an NCAA Tournament berth. The Tigers made their usual surge in Hoover with three straight wins to earn a date with Ole Miss on Sunday with ideas of defending its tournament title and taking the championship trophy back to Baton Rouge for the seventh time in the last 11 seasons.

It’s going to Oxford instead.

Houston Roth and the rest of Ole Miss’ pitchers four-hit LSU, and the fourth-ranked Rebels erased an early deficit and added on throughout to claim the SEC Tournament championship with a 9-1 win at Hoover Metropolitan Stadium. It’s the Rebels’ third-ever tournament title and their first since 2006.

“When they get to this place, they really play so, so well,” Ole Miss coach Mike Bianco said. “But everybody in this tournament is good. That’s why I think it’s such an amazing event, and our guys played really, really well. I think they were very deserving. They were terrific today.”

Ole Miss (46-15) scored nine unanswered runs to win the title in front of 14,126 fans, the second-largest championship crowd in tournament history. The win capped a run through the losers’ bracket after Wednesday’s opening 9-3 loss to Auburn for the Rebels, who will take a four-game winning streak into next week’s Oxford Regional.

“It’s just a confidence booster,” outfielder Will Golsan said. “In a tournament like this, anybody can beat you, so you’ve got to play your best baseball. That’s what we’re going to do next week.”

The Rebels pounded out 15 hits against five LSU pitchers, including nine against Caleb Gilbert (3-5) through the first three innings, but Chase Cockrell’s RBI single, a run on a wild pitch and Nick Fortes’ RBI infield single was all Ole Miss mustered until the most timely knocks came in the seventh. Golsan’s two-run single and a two-run homer from Tim Rowe as part of a four-run frame blew the game open, putting the Rebels on the way to their 11th win in their last 15 games.

“It’s always big to get a little insurance when your pitchers are throwing so well,” Golsan said. “It was 3-1 there for a little while, and it finally broke open for us.”

Michael Fitzsimmons added a two-run, pinch-hit home run in the ninth. Golsan had three hits and scored twice while Fortes, who was named tournament MVP, went 4-for-4 with an RBI to finish with a .556 average for the tournament. Golsan and Thomas Dillard were also named to the all-tournament team for Ole Miss.

“I was seeing it really well,” Fortes said. “Honestly I was just going up there with the same approach every at-bat. Just staying hard and flat through the middle, getting my foot down and being on time for everything. Just trying to do my job in the lineup, and that’s to keep it moving, drive guys in and move runners over.”

In his first start since April 10, Roth allowed an RBI double to Nick Coomes in the first, but the Oxford native combined with Ryan Rolison, Will Stokes and Greer Holston to silence LSU’s bats the rest of the way. Roth surrendered just four hits while striking three in 4 ⅓ innings while Rolison (9-4) came back on five days of rest and pitched two hitless innings, getting back-to-back strikeouts of Jake Slaughter and Hal Hughes to wiggle out of a one-out, bases-loaded jam in the sixth and preserve Ole Miss’ 3-1 lead at the time.

“I think that’s the most adrenaline I’ve ever had,” Rolison said. “With our fan base behind you, it just sends adrenaline through you. I was able to get my fastball past (Hughes) and get us off the field.”

Holston came on in the eighth and retired six of the seven batters he faced while striking out three. LSU (37-25) didn’t have a hit after the fifth.