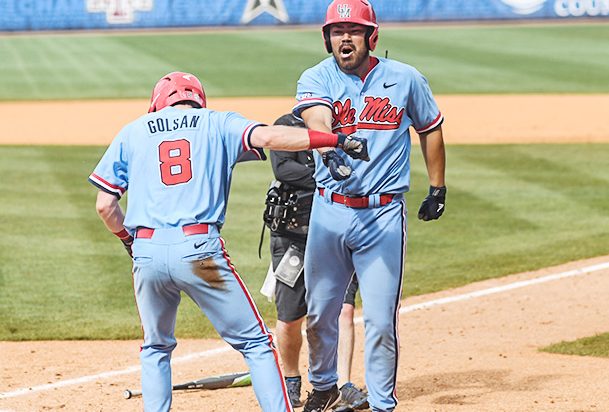 Ole Miss' Tim Rowe, right, celebrates his two run home run with Will Golsan against LSU in the championship game of the SEC Tournament at the Hoover Met in Hoover, Ala. on Sunday, May 27, 2018. (Bruce Newman, Oxford Eagle via AP)

HOOVER, Ala. — What do you do when people start doubting you?

You do your part to remove that doubt. Or at least you do everything you can to try.

That’s exactly what Ole Miss did this week.

Ole Miss’ fourth win in four days at Hoover Metropolitan Stadium on Sunday gave the Rebels their third-ever SEC Tournament championship, a run that ensures the Rebels will be a national seed in the NCAA Tournament. It’s not official yet — the top 8 seeds won’t be announced until the field of 64 is unveiled late Monday morning — but with the SEC West regular-season champions now having the second-most wins in the nation with 12 of those coming against RPI top-25 teams, here’s a spoiler (or just the obvious): Ole Miss will be a national seed and play a super regional at Oxford-University Stadium should the Rebels win next week’s Oxford Regional.

And that’s really what this past week was about for Ole Miss.

National projections heading into the SEC Tournament had the Rebels as one of the last national seeds, but would a team without 20 conference wins and a non-conference strength of schedule near the 200s nationally lose that spot with a poor showing in Hoover, particularly if another team in hot pursuit (Florida State, Clemson and Texas Tech to name a few) went deep in their respective conference tournaments?

Ole Miss might’ve been in jeopardy of finding out had it gone two and out, but the Rebels helped themselves with the extra-innings rally against Georgia on Thursday to avoid elimination. The Rebels likely locked it up by cruising past Auburn on Friday for that all-important 20th conference win — only one SEC team since 2002 has received a national seed without that many league wins heading into Selection Monday (South Carolina had a league game canceled in 2012 and finished with 19).

A grown-up performance from Jordan Fowler helped Ole Miss erase any of that lingering doubt Saturday in a semifinal win over Texas A&M before the Rebels had some fun in Sunday’s 9-1 win that gave them their first SEC Tournament championship since 2006.

The Rebels dogpiled on the mound after Greer Holston got Beau Jordan swinging to end it, and Mike Bianco, who’s now delivered two of the three SEC Tournament championships in the program’s history, got a Gatorade bath. Ole Miss celebrated like it should’ve because it’s hard to win any kind of championship, so when you do pull it off — particularly in a baseball conference that’s as cutthroat as the SEC is — it should be savored.

But this week was more about Ole Miss securing home-field advantage for the games that matter starting Friday. For all the success Bianco has had in Oxford over the last 18 seasons, the constant knock on Ole Miss’ all-time winningest coach is the inability to get his teams to Omaha.

It’s happened once during his tenure in 2014, which is also the last time the Rebels won an NCAA Tournament game. But even before Sunday, the Rebels ensured that the road back there will go through Oxford — the importance of which can’t be understated.

Ole Miss has played 32 games at Oxford-University Stadium this season and lost just four of them, and the Rebels have yet to lose back-to-back games in front of their home crowd. Ole Miss finished second nationally in attendance during the regular season with overflowing crowds that often helped pull the Rebels through in tight games with Ole Miss going 7-1 in one-run games at home.

This Ole Miss team has proven all season to be one of the nation’s best regardless of where it’s played, and the Rebels quickly reaffirmed in Hoover that they have as much of a shot as anybody to be one of the final eight teams standing at the College World Series next month.

Sunday’s trophy was a nice parting gift on the way out of town.