Breaking down Ole Miss’ competition in the Oxford Regional 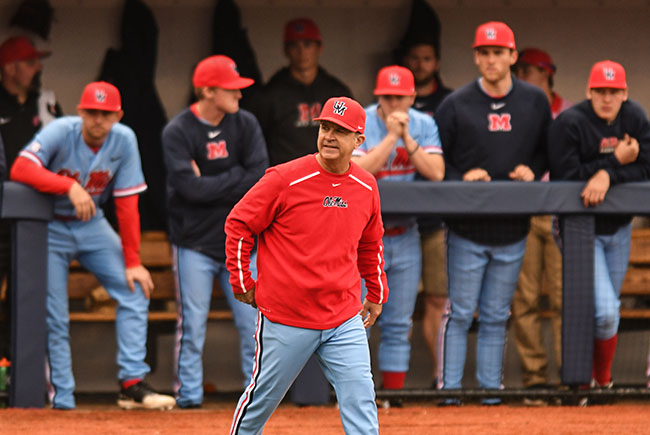 The road to Omaha will go through Oxford this year as Ole Miss earned a No. 4 national seed, meaning the Rebels will also host a super regional if they advance that far.

Ole Miss will first have to get out of the Oxford Regional against a field that’s got a glaring omission: another Power Five team. The top-seeded Rebels will open the regional against No. 4 seed Saint Louis on Friday at 6:30 p.m. after No. 2 Tennessee Tech and No. 3 Missouri State start the double-elimination tournament at 2 p.m.

“A little surprised,” Ole Miss coach Mike Bianco said. “Not because of any particular team they sent here. All the teams are regionally close, all a bus ride away, but nobody from a Power Five. Then sometimes I think unfortunately for the casual fan it loses some of its zip.”

It’s just one of four regionals with one Power Five team (a team from the SEC, ACC, Big 12, Big 10 or Pac 12), though the Rebels know better than to overlook anyone at this time of the year. An opening-day loser would have to win three games in three days, including an if-necessary game Monday, to extend its season to next weekend.

“It’s a new experience for us getting to play teams that we haven’t faced before,” catcher Nick Fortes said. “We’re excited for it, but we know that anybody can beat anybody, so we still have to play well.”

Here’s a deeper look at the teams that will be trying to pull the regional upset this weekend.

Ole Miss’ opening opponent has proven to be a championship team this season, making them a dangerous 4 seed.

Saint Louis eased its way to the Atlantic 10 regular-season championship with a 19-4 mark in league play that included four sweeps before also capturing the conference tournament championship. The Billikens also went 5-2 against Power Five competition with three of those wins coming against Purdue, a 2 seed in the Chapel Hill Regional.

Led by Jake Garella (.362 average) and Alex King (14 home runs, 51 RBIs), Saint Louis is solid offensively (.285 average) but excels on the mound. The Billikens are 16th nationally with a 3.32 earned run average led by a bonafide ace in right-hander Miller Hogan, who’s been an innings-eater.

Hogan, who’s gone at least six innings in all 15 starts with two complete games, has allowed 73 hits while walking just 12 in 102 ⅔ innings with 129 strikeouts. He’s holding opponents to a minuscule .196 average and has yielded just 21 extra-base hits, though 10 of them have been homers.

But Ole Miss, which leads the SEC and ranks 14th nationally with a .303 average, will be the best lineup Hogan has faced all season.

Nobody’s really sure what to make of the regional’s No. 2 seed from the Ohio Valley Conference.

Yes, Tennessee Tech has more wins than anybody in the country, pairing with Ole Miss to give the regional both of the nation’s wins leaders. But the Golden Eagles played just four games against top-50 RPI teams (2-2) and none against the RPI top 25.

One thing Tennessee Tech will bring to town is one of the nation’s most prolific offenses. The Golden Eagles lead the nation in average (.352) and home runs (128). Seven players have double-digit long balls led by Kevin Strohschein’s 18.

Tennessee Tech has had success against SEC teams this season with wins over NCAA Tournament participant Vanderbilt and Tennessee. The Golden Eagles also took a game from Troy, another NCAA team, in early March.

Tennessee Tech won the OVC regular-season championship and didn’t lose back-to-back games until Morehead State pulled the upsets in the finals of the OVC Tournament over the weekend.

The Missouri Valley Conference regular-season and tournament champions are another low seed to keep an eye on.

The Bears enter the regional as one of the nation’s hotter teams having won 12 of their last 13 games. Missouri State, which is No. 25 in the latest RPI rankings, also tested itself outside the MVC with a No. 60 non-conference strength of schedule that included games against national seeds Oregon State (two losses) and Arkansas (loss) as well as regional host East Carolina (win) and Oklahoma State (two losses).

Pitching has carried the Bears with Dylan Coleman leading a weekend rotation that’s got a sub-4 ERA. Coleman has allowed 67 hits and racked up 122 strikeouts in 96 ⅔ innings while limiting opponents to a .198 average.

Missouri State is a veteran group that isn’t new to this stage, having been to four regionals in the last seven seasons. The Bears spoiled the Fayetteville Regional for Arkansas last year by upsetting the Razorbacks to win it before falling to TCU in the super regionals.