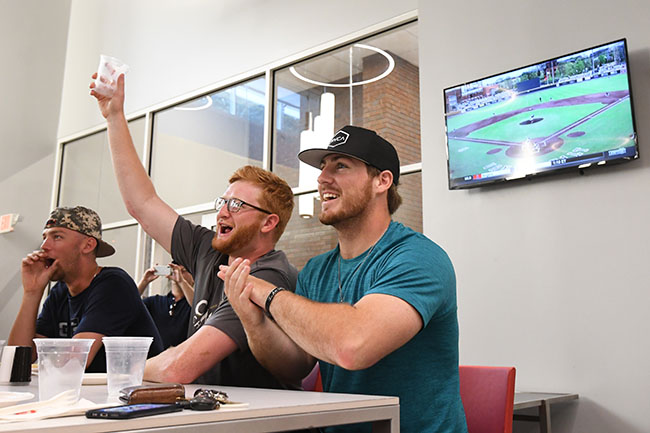 Ole Miss knew it would be a national seed in this year’s NCAA Tournament. Exactly how high up the pecking order the Rebels would be was the only mystery.

So when the NCAA Division I Baseball Selection Committee had Ole Miss among the top 4 overall seeds that were released half an hour before the 64-team tournament field was announced Monday morning, ensuring the Rebels of their highest tournament seed in program history, it was a moment to savor.

“It’s something you dream about,” shortstop Grae Kessinger said. “It’s something when you say you want to come play baseball at Ole Miss that you expect. These fans deserve it, and this team deserves it. It’s a really special moment.”

Fresh off its run to the SEC Tournament championship, the Rebels will open the Oxford Regional on Friday as the No. 4 overall seed. It’s the first time Ole Miss (46-15) has been a national seed since 2005 when the Rebels were the tournament’s fifth overall seed.

Ole Miss, the top seed in the regional, will face No. 4 seed Saint Louis (38-18) in its regional opener at 6:30 p.m. (SEC Network) looking for its fifth straight win after winning four games in four days to win its third-ever SEC Tournament title Sunday. They’ll be joined in the four-team regional by No. 2 seed Tennessee Tech (48-9) and No. 3 seed Missouri State (39-15), who will open the regional Friday at 2 p.m.

Tennessee Tech, which leads the nation in home runs, is the only team in the nation with more wins than Ole Miss. The Rebels went two and out the last time they hosted a regional in 2016 and haven’t won an NCAA Tournament game since 2014.

“We’re a team that shows up,” outfielder Thomas Dillard said. “We’re not going to take a day off, and our lineup, every one of them can pick each other up and our pitching staff is there. Obviously guarding against (a letdown) is a big thing, but we’re just going to go out there, play our game and take care of our business.”

The championship game of the double-elimination regional is set for Sunday at 5 p.m. with an if-necessary game scheduled for Monday. Should Ole Miss win its regional, the Rebels would host the winner of the Austin Regional (No. 13 seed Texas, Indiana, Texas A&M and Texas Southern) for a super regional beginning June 8, which could set up a rematch of the 2005 super regional between Ole Miss and Texas.

Oxford-University Stadium has proven to be one of the nation’s best home-field advantages with Ole Miss compiling a 28-4 record at home this season. That includes a 17-0 mark against non-Power Five opponents.

“It was just kind of surreal when we won the SEC championship,” pitcher Ryan Rolison said. “Now being a national seed and getting to play at home, the home-field advantage we have here at Swayze is going to be huge.”

The SEC accounted for half of the national seeds with Florida, the tournament’s No. 1 overall seed, No. 5 Arkansas and No. 8 Georgia also earning top 8 seeds. No. 2 Stanford, No. 3 Oregon State, No. 6 North Carolina and No. 7 Florida State round out the national seeds.

Having won eight of its last 10 games and 11 of 15, Ole Miss enters the tournament with more wins than any of them. The Rebels, who’ve lost consecutive games just twice this season, are No. 6 in the latest RPI rankings with 20 top-50 RPI wins.

“Our team has played really well and is very deserving of this,” Ole Miss coach Mike Bianco said. “Haven’t been streaky. We finished well, but that’s not what got us here. We played well from Game 1 and finished it off. Just excited and proud.”