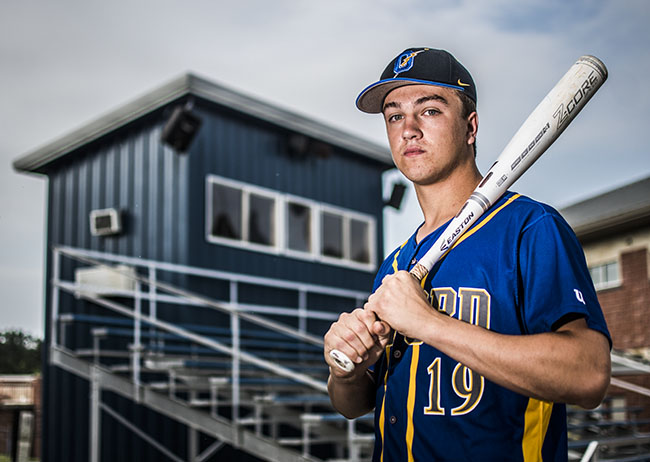 Two years ago Clark Stovall knew he was about to join a new school and a new team. He also knew it was a winning team.

Before transferring to Oxford from Jackson Prep ahead of his junior season, Stovall decided to check out his future teammates win the 2016 Class 5A state championship series against Hattiesburg at Trustmark Park in Pearl.

“I knew that when I came up here the next Summer I was going to have really big shoes to fill,” Stovall said. “I was coming off a pretty good sophomore year. I came up here and met an awesome group of guys. …they were incredible.”

It was a decision that paid off, allowing Stovall to see exactly what he was kind of program he was about to be a apart of. Upon his arrival to Oxford it also was clear it would benefit the Chargers just as much having Stovall in their dugout. It helped him earn the 2018 EAGLE Player of the Year honor.

“He came in last year and I was told he was a solid middle of the order guy and that’s what we needed,” Oxford coach Chris Baughman said. “He was really good for us last year driving in runs for us in the five-hole and then when we decided to make the lineup change, moving Drew (Bianco) to the leadoff spot it was like Clark caught fire.”

In his first season as Charger, Stovall hit .371 at the plate for 36 runs batted in, 32 runs scored and one home run. He also had 13 extra base hits. It was an adjustment for the former Patriot but not for the usual reasons.

In his senior year the plate appearances dropped by nearly 30 yet his batting average improved by 70 points (.441). In 31 games played Stovall hit for 28 RBIs, one home run and 16 extra base hits (12 doubles, four triples). He also scored 32 runs.

“My approach has been the same since I got here,” Stovall said. “Just hit where it’s pitched and try to get it to the next guy.”

Stovall proved vital batting third in the lineup, coming up with clutch hits in the second round 6A series against Madison Central to send Oxford to the North Half championship series and also came up with defensive gems at the wall in center field.

It was a big adjustment for the Chargers this season, moving up to Class 6A after dominating 5A the past three years. Oxford finished as one of the final four teams vying for a state title, being eliminated in the North Half series.

Getting to the semifinals and winning the Region 2-6A title their first year in the region took every player in the dugout to do so. Also representing Oxford on the 2018 EAGLE All-Area team is Drew Bianco, Tyler Smith and Parker Stinnett.

Smith and Stinnett became Baughman’s 1-2 punch on the mound this season, grinding out key wins.

“They’re obviously different,” Baughman said of his pitchers. “Where Tyler gave himself to be successful was in the offseason. He developed two off-speed pitches that proved to be huge for him. He didn’t have to throw them that much, but he had them. …you look at Parker’s record and it’s very misleading. Parker to me did not have a bad outing all year. People are going to look at his stats and say ‘oh, he didn’t have a good year this year as last year.’ Probably not and part of that was I think he put a little bit of pressure on himself but he grew as a person and as a player throughout this year by having to be the guy.”

The Commodores also had a year of transition with a new coach and a new classification, moving up to Class 5A.

John Walker was hired as Greg Lewis’ replacement, who took over as the school’s athletic director last summer. Walker and the Commodores had growing pains together, but three players helped make the adjustment period slightly easier.

In his sophomore season Coleman led Lafayette with a .344 batting average, hitting for 12 RBIs, six extra base hits and scored 12 runs.

Westbrook had the team’s second best average at .309. The junior led the team with 17 RBIs and scored 15 runs. On the mound Westbrook had an ERA of 1.88 in 10 appearances, striking out 24 opposing batters in 18 2/3 innings of work.

Megrow led the team on the mound with a 1.51 ERA and with 29 strikeouts in 37 innings pitched. He did not allow a home run in 155 batters faced.

“Zach started the year as kind of a bullpen, long relief-type guy,” Walker said. “He kept having quality outings. What Zach does is he competes inside the strike zone. Multiple pitches, all for strikes. …through injuries, neither (Hunter or Foster) go to pitch. Foster did some late but Hunter never recovered form his elbow (injury). Offensively, Hunter was our best guy and Foster was so productive. If we were doing anything offensively usually those two were right in the middle of it.”

In Jeb Lee’s second season at the helm of the Blue Devils’ baseball program Water Valley finished with a region title and a 11-11 record. They were a young team but there were two seniors who helped guide the way in Ty Varner and Gavin Darby.

Varner was the best weapon the Blue Devils had at the plate, hitting .417 for 12 RBIs and four extra base hits. Darby hit for .338 for a team best 14 RBIs, a home run and seven extra base hits. He also scored 21 runs.