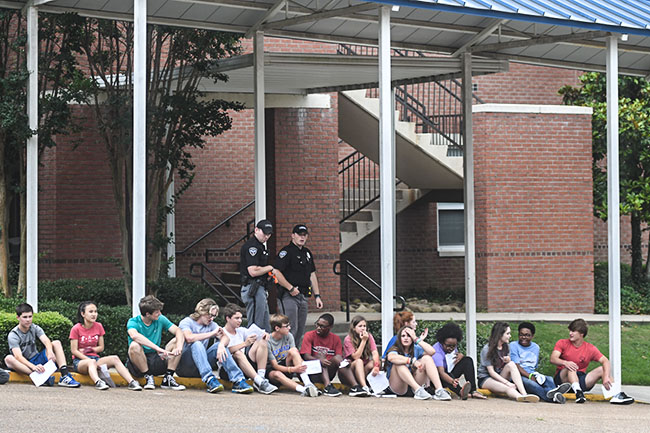 The city of Oxford held an active shooter training session Tuesday to make sure schools and first responders know how to react in case the unthinkable ever should happen at an Oxford school.

About 30 Oxford High School students volunteered to take part in the training at Oxford Intermediate School. The students trained for the event starting at 7 a.m. Tuesday. Each received their role to portray during the training, as either someone wounded, someone killed or to be one of two “shooters.”

By 1:53 p.m., police officers with OPD arrived at the school and two officers ran inside to subdue the shooters. Several other police officers then ran into the building to carry out the 24 “wounded” students.

OPD officers had the two shooters subdued within 5 minutes of arriving at the school.

Each injured student carried a tag that indicated the severity of their wounds. Paramedics responded to the more seriously injured first. They applied bandages on those with flesh wounds while others were carried off on stretchers and put into ambulances. Wounded students wore make-up and fake blood to show their injuries.

Oxford Emergency Management Coordinator Jimmy Allgood said the training session was primarily for Oxford police, fire and Baptist Memorial Hospital-North Mississippi, but hopes to stage a larger-scaled event soon that would have other local, state and federal agencies responding as well.

“We’re doing this training exercise to beef up our internal plan,” he said as the event was unfolding. “This is for us to learn so we have the best plan.”

Michael Harvey, 14, and Cade Stone, 16, were the two “fatalities” during the event. They had to remain inside the building until the session was over while police helped out the rest of the students – at times, carrying students across their shoulders or cradled in their arms.

Stone said he volunteered to see what it would be like.

“It was very loud,” he said. “We were the only people in our area but you could hear people screaming and everything going on.”

The two teens said that while the training event was scary, it is unfortunately necessary.

After the event, Allgood said the training event went well and showed a “few holes” in the city’s response.

“But that’s what this training is for because I’d rather find any problems during an exercise than out in real life,” Allgood said. “But overall everyone did very well. They did their jobs and knew what they’re doing.”