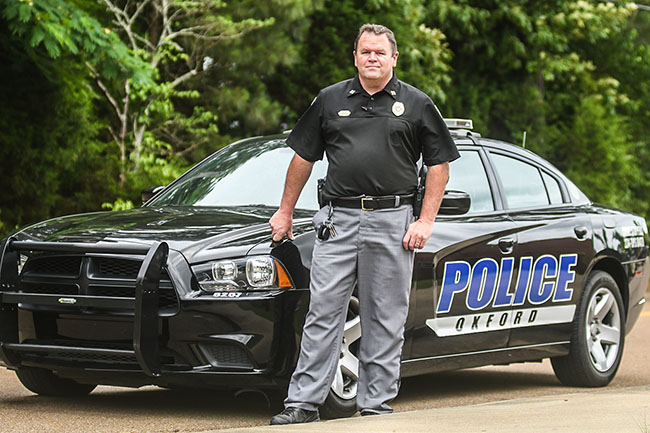 Officer Alan Ivy, in Oxford, Miss. on Tuesday, May 29, 2018, is the 2018 recipient of the Virginia H. Chrestman Outstanding Employee Award for the city of Oxford. (Bruce Newman, Oxford Eagle via AP)

Oxford Police Capt. Alan Ivy knew and admired the late Virginia H. Chrestman most of his life while growing up in Oxford, which made winning an award named after her even more special to him.

Ivy was presented with the Virginia H. Chrestman Outstanding Employee of the Year for the city of Oxford award at City Hall on Tuesday.

Ivy has been with OPD for 27 years. He left about 13 years ago for nine months to work for the District Attorney’s Office before returning to OPD where he’s remained for the last 14 years. Ivy oversees the Oxford Police Department’s community outreach programs and is the supervisor of the Downtown and Housing districts and school resource officers. In 1995, he worked with the Oxford Housing Authority under OPD and he says there is where he really learned about community policing.

“Being a police officer isn’t just about writing tickets and making arrests,” he said. “There are times you have to write tickets and arrest people, but there are so many ways to reach out and help people. My main job is to bridge the gap between the police department and Oxford citizens.”

Ivy, 54, has been instrumental in developing many of the department’s community programs, including the OPD haunted house, Active Shooter for Civilian class, Coffee with a COP, OPD Fun Day, Camp Cops and the Women’s Self Defense class.

The award was established in memory of Chrestman, who worked for the city of Oxford for 30 years as secretary, deputy city clerk and from 1974 until 2003, served as city clerk, working under former mayors John Leslie, Patricia C. Lamar, Richard Howorth and George “Pat” Patterson.

On Tuesday, Ivy received a check for $1,000, a certificate and his name added to the growing list of award recipients and he and his family were treated to lunch.

Ivy was nominated by OPD’s Sgt. Ryan Winters who said Ivy was the “most dedicated employee.”

“He has dedicated most, if not all, of his time to community relations, which has brought our community closer together,” Winters wrote in his nomination letter. “He has also been a great role model, to not only myself but other young officers.”

Ivy lives in College Hill with his wife, Gena. They have six children and four grandchildren.

Movies & Music in the Park returns for Summer…