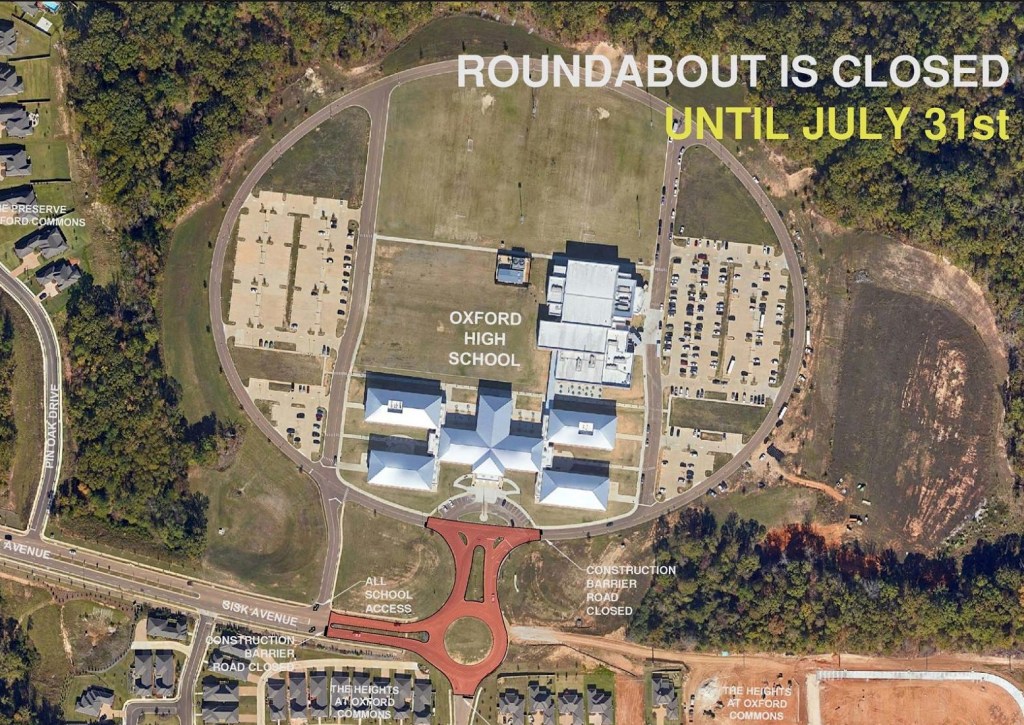 For the next two months, the roundabout in front of Oxford High School will be closed to allow contractors to connect the roundabout to Sisk Avenue Extended.

Sisk Avenue near the roundabout will be closed to traffic until July 31.

The westernmost entrance to the school will be the only access to OHS during this time.

City Engineer and Public Works Director Bart Robinson said the closure is to complete the connection to the roundabout and to make modifications for the extension.

Sisk Avenue will be extended east to connect with Highway 6. With the quickly growing Oxford Commons development, the joint city-county project will allow for another way to access the residential and commercial development as well as Oxford High School and Della Davidson Elementary.

Robinson said the road is on track to be completed on or before early 2019.

“They are making good progress,” he said Thursday. “Utility relocation has taken longer than expected. But with the progress made to date, I believe it will happen sooner.”

The city raised the ad valorem tax by 3 mills over the last three years – 1 mill per year – to help cover the cost of the bond payment for the roads. The supervisors are using interest earned from its $20 million investment from the sale of Baptist Memorial Hospital-North Mississippi in 2012. Another quiet partner has also been named in helping to find funding for the roads — the University of Mississippi. While the university has not given actual dollars toward the construction of the roads, the university worked with the Mississippi Legislature that voted to give $3 million toward the construction of West Oxford Loop.

No fatal wrecks in Lafayette County over Memorial Day…