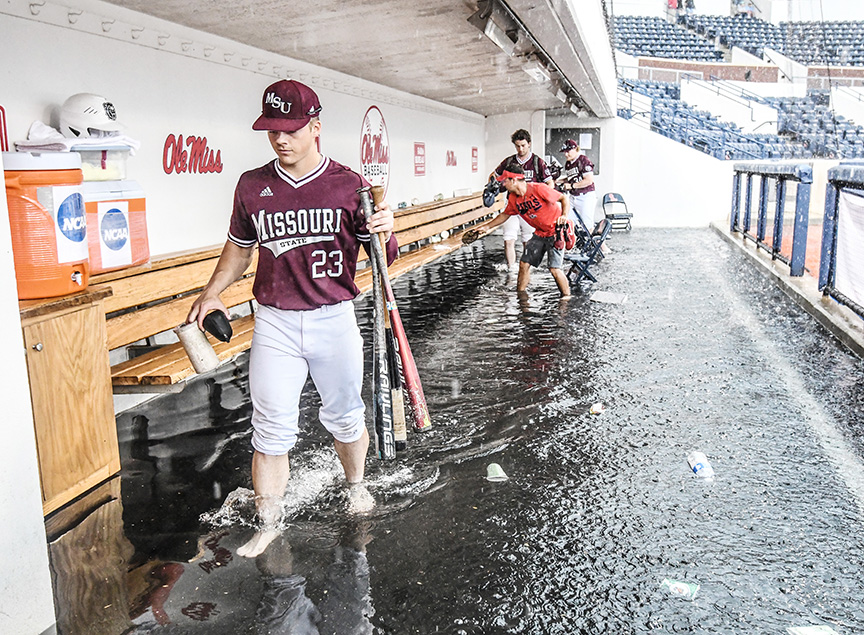 Missouri State outfielder Jack Duffy (23) carries bats out of a flooded first base dugout before the start of the game against Tennessee Tech for the NCAA Oxford Regional, in Oxford, Miss. on Friday, June 1, 2018. (Bruce Newman, Oxford Eagle via AP)

A storm that blew through Oxford on Friday afternoon caused flash floods on several streets, a handful of stranded motorists and postponed the opening round of the Oxford Regional baseball tournament.

According to the National Weather Service, 2.9 inches of rain fell in about 30 minutes in Lafayette County. Wind gusts of about 45 mph were also reported in Oxford.

The Oxford Police Department responded to at least four cars stuck in flash flood waters and warned citizens to stay off the roads until the water subsided.

The rain also forced the entrance of the Oxford Activity Center off Price Street to close for an undetermined amount of time as the rains caused silt and runoff from the construction of the new activity center building to block the road. Blocked storm drains in the Notting Hill subdivision caused several roads to flood.

Public Works Director Bart Robinson said Saturday morning at this time that he was not aware of any permanent damage to city infrastructure from the rain.

“I do know there was some personal private property damaged but I don’t know the full extent,” he said.

Mayor Robyn Tannehill tweeted Oxford had 5 inches of rainfall Friday and that city crews were out cleaning out drains as quickly as possible.

The start of the Oxford Regional, originally scheduled to begin at 2 p.m. on Friday, was postponed to Saturday afternoon as the storm dumped heavy rain on Oxford-University Stadium, leaving several inches of standing water in the dugouts and outfield. The tournament will see three games played on Sunday rather than the two games originally announced, and at least one game played on Monday.

The high winds associated with the storm knocked down a tree on College Hill Road and a power line on Molly Barr Road caused some power outages in the northern portion of Oxford. Downed trees and power lines also affected North East Mississippi Electric Power Association customers in Abbeville.