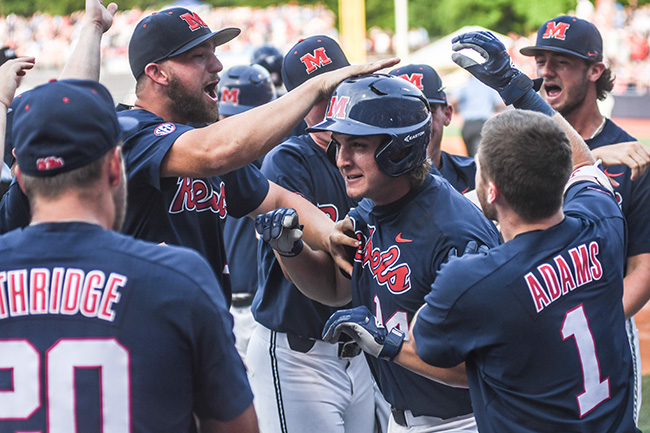 Mike Bianco was vocal during the week in his conviction of Saint Louis’ threat as a No. 4 seed given the Billikens had a bonafide ace.

Turns out Ole Miss’ coach didn’t have much to worry about.

Ole Miss chased Miller Hogan before the middle innings, setting the tone for a convincing 9-2 win in its Oxford Regional opener Saturday at Oxford-University Stadium. The Rebels will take a five-game winning streak into a winners’ bracket matchup with No. 2 seed Tennessee Tech — a 6-4 winner over Missouri State in the tournament opener — on Sunday at 4 p.m.

A sixth straight would mean a berth in Monday’s regional title game for the Rebels (47-16), who picked up their first NCAA Tournament win since 2014. Should the Rebels lose, they’ll meet either Missouri State or Saint Louis (38-19), who will play the first elimination game Sunday at noon, Sunday night at 8.

“Watching him on film and talking to people that have faced him — and you can tell just by the numbers — he can command it,” Bianco said. “I thought we did a good job of not chasing some pitches. Subsequently we took some pitches, but I thought we put some pressure on him to get the ball where we could get some good swings off, and we did.”

Hogan entered the regional with a 2.19 earned run average having struck out 129 in 102 ⅔ innings for the Atlantic 10 regular-season and tournament champions, but the SEC’s top offense imposed its will early in front of a postseason record crowd of 11,304. Ole Miss had all nine of its hits against Hogan with five of them going for extra bases, including a home run from Cole Zabowski, an RBI triple from Jacob Adams and RBI doubles from Chase Cockrell and Ryan Olenek as part of a six-run second that put the Rebels in control.

Zabowski’s two-run shot to center following an error erased Saint Louis’ 2-0 lead as Ryan Rolison took some time to find his command before carving up the Billikens’ lineup. Cockrell’s double gave the Rebels their first lead, and by the time Tyler Keenan swatted a two-run homer in the third in his first game back from a wrist injury that kept him out of the lineup the last four games of the SEC Tournament, the Rebels had a seven-run lead that was never in jeopardy with neither team recording a hit after the fifth.

“We just made too many mistakes tonight and had to dig deep in that second inning, and it hurt us,” Saint Louis coach Darin Hendrickson said.

Fortes and Olenek each had two hits while Thomas Dillard drove in a run. Grae Kessinger went 0-for-3 and scored a run in his return to the lineup from a hamstring he tweaked six days earlier in the SEC Tournament championship game.

“There’s things that (Kessinger) can’t do quite yet,” Bianco said, “but certainly his presence on the field means a lot.”

A leadoff walk and two singles in the fourth ended the night for Hogan (10-4), who had not gone fewer than six innings in a start all season. He allowed season-highs in hits and earned runs (6) while walking two and striking out four. Ole Miss went 9-for-21 (.458) against Hogan, who came in holding opponents to a .196 average.

“We just did a good job of coming out and putting good (at-bats) together,” Zabowski said. “That was the goal the whole time was to just kind of pass the baton to the next guy. We got a hold of him in that second inning.”

Connor Lehmann worked five innings of hitless relief for Saint Louis, but Rolison (10-4) sharpened his command as the game wore on to keep the Billikens’ bats equally as quiet and continue his recent string of quality starts. Rolison issued three walks in the first four innings with two of them scoring on Nick Reeser’s first-inning double and Aaron Case’s second-inning single, but Reeser’s single in the fifth was the only other hit Saint Louis mustered against the left-hander in his final three innings of work before freshman Max Cioffi finished it with two hitless innings.

Rolison retired the last seven batters he faced, ending his night by striking out the side in the seventh to give him a career-high 13 punchouts. It’s the longest outing since going seven against LSU on April 26 for Rolison, who’s logged at least six innings in each of his last four starts without giving up more than two earned runs in any of them.