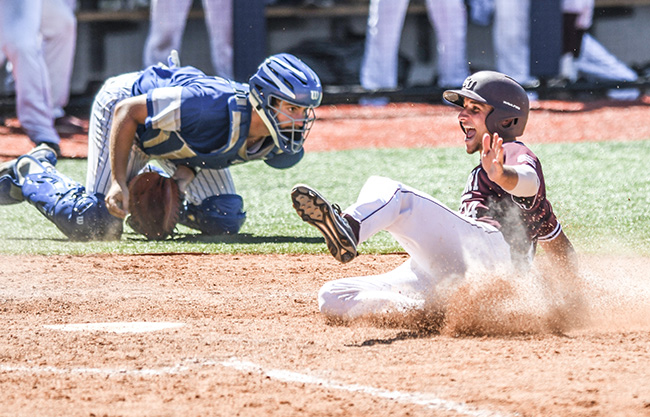 Missouri State catcher Drew Millas (24) scores the game winning run as St. Louis catcher James Morisano (18) takes the throw in the bottom of the 9th, in the NCAA Oxford Regional, at Oxford-University Stadium in Oxford, Miss. on Sunday, June 3, 2018. Missouri State won 9-8 on a walk off. (Bruce Newman, Oxford Eagle via AP)

Matt Brown did not have the start to the Oxford Regional that he was hoping for but knew he was going to win the game for his team.

With his mom in the stands and the winning run at second base the senior provided one more memory and kept Missouri State’s season alive for another game in process. Brown hit an RBI-single in the bottom of the ninth to score Drew Millas and the Bears defeat Saint Louis 9-8 in the first elimination game of the regional.

“I was just trying to do something to help the ball club win,” Brown said. “I told myself I was going to be the one who comes through. As a senior it’s something that you always want. Especially in the last inning in a regional to move on.”

Missouri State will play the loser of the Ole Miss – Tennessee Tech winner’s bracket game in another elimination game at 8 p.m. on Sunday.

It was a back and forth game where 10 runs were scored in the first two innings.

After Missouri starter Ty Buckner gave up six runs off four hits in two innings he was picked up by Davis Schwab and Jake Fromson in relief. The pair worked 5 2/3 innings of one-run baseball and give up only one hit.

“(I said) Don’t let them score anymore,” Missouri State coach Keith Guttin said. “We play 56 games. We’ve been through everything. Seen everything. We don’t get alarmed. We dont’ panic. We just keep playing.”

Brown went 1-for-3 with the winning RBI. Missouri State leadoff hitter Hunter Steinmetz was 3-for-5 at the plate with three RBIs and a home run. Right fielder Jack Duffy went 1-for-4 and had three RBIs off a home run.