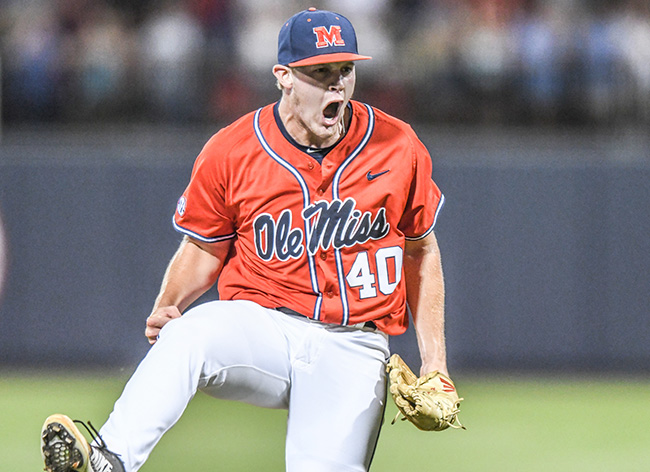 Houston Roth has pitched on big stages before, including a pair of starts in the MHSAA Class 5A championship series as part of back-to-back state title teams during his prep days at Oxford High.

But in what’s been the most high-leverage appearance to this point of his brief collegiate career, the local product experienced a first Sunday with Ole Miss trying to hold off the nation’s top offense and advance to the Oxford Regional final.

Roth came on to face Tennessee Tech leadoff hitter Alex Junior with two outs and the tying run at third base in the bottom of the ninth after the Golden Eagles furiously rallied to cut into the Rebels’ four-run lead. With most of the 10,891 fans packed into Oxford-University Stadium standing and riding a wave of emotion with every pitch, the sophomore right-hander delivered.

Roth struck out Junior in a back-and-forth at-bat. The final out preserved a wild 9-8 win for Ole Miss, clinching the Rebels’ spot in the regional final and helping them avoid a much tougher path to get there.

“Finally hearing my name called, it’s exciting because that’s the first time I’ve ever come in the ninth inning for a game I think at any point in my career,” Roth said.

Ole Miss (48-15), which tied the program record for single-season wins with its sixth straight, will go for the regional championship Monday at noon against either Missouri State or Tennessee Tech (49-10), which had to turn around and play the Bears in an elimination game late Sunday night. Ole Miss, the only unbeaten team left in the double-elimination regional, needs just one win Monday to clinch its first super regional appearance since 2014.

An if-necessary game would be played at 6 p.m.

“It was a big win for us, getting that momentum into the final tomorrow,” said center fielder Will Golsan, who finished 3-for-5 with three RBIs. “I’m pretty sure we’re ready for it.”

Nothing about it was easy against a Tennessee Tech team that came in leading the nation in batting average (.342) and home runs (129). The Golden Eagles hit three more, including a pair from Nick Osborne, in a back-and-forth contest that lasted 4 hours, 1 minute.

Tennessee Tech got back-to-back home runs from Osborne and catcher Brennon Kaleiwahea in the third to erase Ole Miss’ 2-0 lead and answered the Rebels’ two-spot in the fifth with two-out RBI singles in the home half of the frame from Trevor Putzig and Kevin Strohschein to chase Brady Feigl, who allowed four earned runs on eight hits while striking out eight in his shortest outing since going 3 ⅓ innings against South Carolina on May 5.

“I thought Brady did a great job of mixing early, but when you make a mistake to that good offense, they make you pay,” Ole Miss coach Mike Bianco said.

Tennessee Tech outhit Ole Miss 12-9, but the Rebels combined timely ones with eight walks and three hit batters to keep the runs coming. Jacob Adams drew a walk in the sixth and gave the Rebels another brief lead when he scored on Ryan Olenek’s sacrifice fly.

The Rebels caught a break in the eighth when pinch-hitter Tim Rowe swung through Colton Provey’s 1-2 offering for what appeared to be the third out, but Rowe reached when the ball skipped to the backstop before Grae Kessinger followed with an RBI double. Thomas Dillard and Cole Zabowski each worked free passes in the ninth before Golsan extended the lead with RBI single and then raced home from second to give Ole Miss a 9-5 lead when the final pitch of Anthony Servideo’s bases-loaded walk scooted far enough away from Kaleiwahea.

The Rebels needed every run with Will Ethridge and Parker Caracci combining to allow four runs in 3 ⅔ innings of relief. Caracci (5-2) struck out three and walked three in 2 ⅓ innings with two of those walks and a hit batter coming in the ninth. Caracci gave way to Greer Holston, who walked in a run and allowed a two-out, two-run single to Collin Harris before Roth was summoned for his first relief appearance since allowing four earned runs in 1 ⅔ innings against Auburn in the Rebels’ opening game of the SEC Tournament.

Roth got ahead of Junior 1-2 and threw wide of the strike zone with his next two pitches before getting Junior to swing through his final offering for his first career save.

“That’s a good club over there,” Roth said. “I just had to come in and make my pitches.”

Said Bianco, “An unbelievable college baseball game, and you could tell there was a lot riding on that game. … We can make it exciting, and we did. But just proud of my guys for hanging in there.”