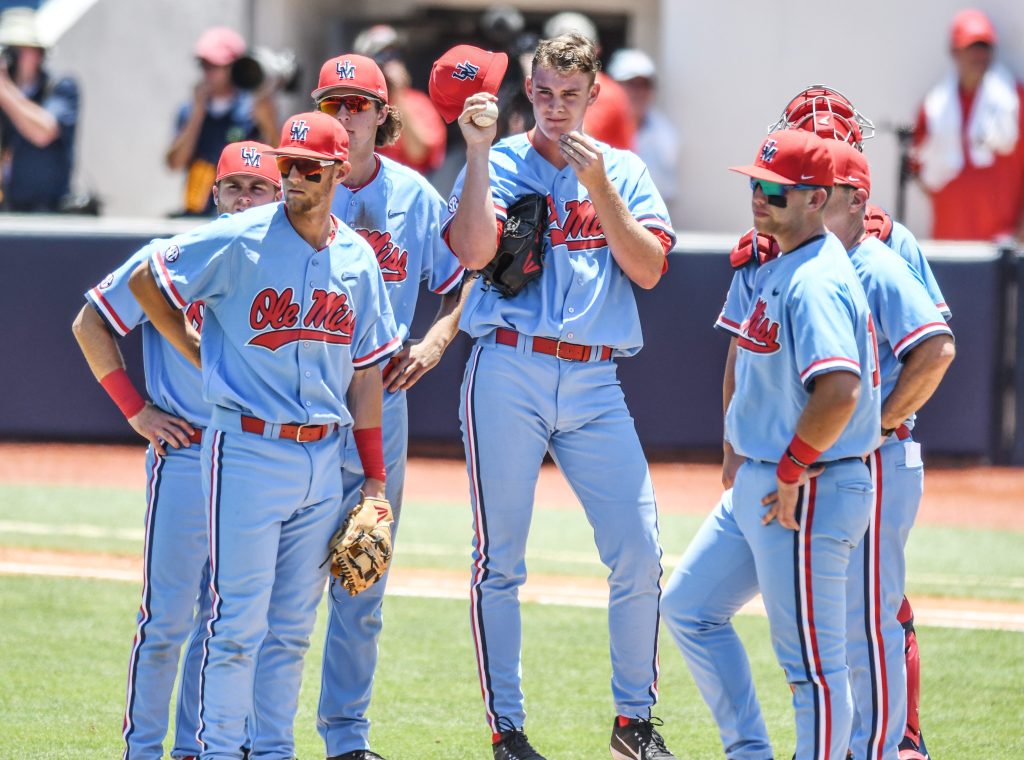 Ole Miss pitcher James McArthur (26) is removed from the game after giving up four runs in the third inning against Tennessee Tech in the NCAA Oxford Regional, at Oxford-University Stadium in Oxford, Miss. on Monday, June 4, 2018. (Bruce Newman, Oxford Eagle via AP)

Ole Miss hasn’t failed to protect its home much this season. And rarely have the Rebels been run out of it.

But Ole Miss’ season is on the brink after a 15-5 thumping at the hands of No. 2 seed Tennessee Tech on Monday in the Oxford Regional final. Ole Miss (48-16) was the regional’s only unbeaten team at the start of the day, so the teams will play again at 6:04 p.m. for the championship.

The loss — Ole Miss’ worst at home since a 16-4 setback to Stetson in March 2015 — dropped the Rebels to 30-5 at Oxford-University Stadium. Ole Miss hasn’t lost back-to-back home games all season, something they’ll need to avoid if they want to return to Swayze Field this weekend for a super regional against Texas, which won the Austin Regional.

Another early exit for McArthur

It was another short outing for James McArthur, who issued leadoff walks in each of the first three innings with the latter beginning a four-run third that began the onslaught for Tech (51-10).

After pitching 5 1/3 innings of scoreless ball in his previous start against Auburn in the SEC Tournament, McArthur (6-1) scattered four hits, walked three and struck out two before leaving with two outs in the third. The junior right-hander has pitched into the fifth in just two of his last six starts and has lasted fewer than three innings in the other four.

Ethan Roberts had one career start coming into Monday’s game, but Tech’s junior right-hander looked more than comfortable in that role.

Roberts (6-1), who had a 2.13 ERA in 25 appearances out of the bullpen, silenced the SEC’s top offense to the tune of four hits and no walks through the first seven innings as Tech built a 10-0 lead. Fatigue caught up to Roberts in the eighth when the Rebels scored all their runs to chase him with two outs in the frame after a season-high 107 pitches.

Roberts came in with 92 strikeouts in 63 1/3 innings and fanned four more in what was by far the longest outing of his career. He hadn’t gone deeper than five innings since logging 5 1/3 against Austin Peay in April 2016.

Tech has used just three pitchers to get through its last two games.

Having already used four pitchers in a game that was well in hand, Ole Miss coach Mike Bianco elected to save other arms by pitching Ryan Olenek in the ninth.

The Rebels’ everyday right fielder, Olenek came on with one out and the bases loaded. After walking in a run, Olenek got Kevin Strohschein to hit into an inning-ending double play. Olenek has played every position during his time at Ole Miss other than catcher and first.