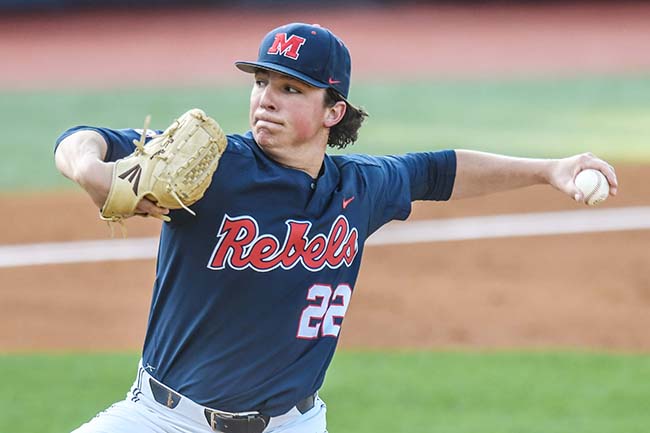 The Major League Baseball First-Year Player Draft will inevitably affect Ole Miss’ current roster. Head coach Mike Bianco and his staff will also be keeping tabs on some of their top signees who could have a decision to make.

Exactly how much will this year’s draft impact the future of the Rebels’ program? One draft analyst believes Ole Miss may have to revamp its entire weekend rotation while chances are increasing the Rebels’ top recruit will make it to campus.

Rolison’s final amateur pitch will almost surely come in his final NCAA Tournament start later this month. Callis said Rolison’s inconsistency this season — his earned run average rose to a season-high 4.13 after allowing eight earned runs against South Carolina on May 4 — will likely drop him out of the top 10, but with a low-90s fastball and plus breaking pitches, the Rebels’ ace is still widely projected to be a first-round pick.

“I still think he’s got one of the best curveballs in the draft,” said Callis, who scouts the Southeast for the draft. “I still think you could argue he’s the best left-handed college pitcher in the draft. Teams lean more toward the college guys than the high school guys, so as a result, I think he goes 11-25 and probably more in the teens.”

The first round as well as compensatory picks will take place tonight starting at 6 p.m. The final 39 rounds will be held Tuesday and Wednesday, which is when Feigl and McArthur are expected to hear their names called.

Callis said he could see Feigl (8-5, 4.03) coming off the board anywhere from the sixth round to the 10th and possibly even higher than that should the fourth-year junior decide to lower his asking price in order to get his professional career started. There’s some command concerns with McArthur (6-0, 4.10), who’s given up 54 hits and walked 35 in 63 2/3 innings, but Callis said he wouldn’t be surprised to see a team take the 6-foot-7 right-hander in the top 15 rounds depending on his financial demands.

“It just comes down to what he wants to go pro because he’ll definitely get the opportunity,” Callis said. “He’ll definitely be drafted as a senior next year if he doesn’t now because he is 6-7 and he is athletic. I’m not sure why he doesn’t throw more strikes when he does have a good delivery, but there’s stuff to work with there.”

Another intriguing arm is Parker Caracci, a draft-eligible sophomore who’s put himself on MLB teams’ radar with his breakout season. With a fastball that can touch the mid-90s and a plus slider that have helped him rack up 71 strikeouts in 46 innings this season, Caracci could possibly be another player taken on the second day, though Callis said teams are trying to figure out if Caracci would be willing to leave Ole Miss after one productive season before spending that high of a pick on him.

“I do think Caracci, if he’s signable, could go (rounds) 6-10,” Callis said. “He’s had a great year and has a really great arm. If you’re looking at just pure tools, he’s probably got better pure tools than Feigl, (Ryan) Olenek and (Nicke) Fortes. The fastball is really good and the slider is really good, so he’s interesting.”

Fortes and Olenek are the Rebels’ top draft-eligible position players with Callis projecting Fortes (.323, 11 home runs, 49 RBIs) to be taken as early as the fifth round. A down year at his position is helping Fortes’ stock, but so is his consistency. The junior is hitting better than .300 for the second straight season as the Rebels’ everyday catcher.

“I don’t know if there’s a true plus tool, but his arm plays pretty much average because he gets rid of the ball quick and receives OK,” Callis said. “He can hit with a little bit of pop. Catchers tend to get pushed up boards because the supply is never equally to the demand and it’s not a good year for catchers anyway.”

Olenek, another junior, may be the Rebels’ most interesting prospect for teams given his small sample size of offensive production and versatility. Ole Miss’ everyday right fielder ended the regular season as the SEC’s leading hitter and sports a .361 average heading into today’s Oxford Regional final. That’s in stark contrast to the .265 and .272 clips he posted as a freshman and sophomore, respectively.

Olenek has played every position in the outfield at Ole Miss as well as some third base, shortstop and second base, which is where the 6-5, 180-pounder may fit best at the next level given his skill set. Callis said he could see Olenek, who has just eight career home runs, being taken within the top 10 rounds.

“There’s not a ton of power, he’s an average runner, his hands and his arm are fine, but it’s a weird profile,” Callis said. “He doesn’t run well enough to play center, he doesn’t have the power you want if you put him on an outfield corner. From what guys have told me, as a pro and to look at him as a potential regular, he’s got to be able to play second base because he doesn’t profile in the outfield.

“Realistically he might wind up being, if he continues to hit, an offensive-minded utility guy who could fill in at five positions.”

Ole Miss fans and coaches have been waiting for two years to see if outfielder Joe Gray will make it to campus after committing to the Rebels as a sophomore at Hattiesburg High.

There’s been considerable first-round buzz surrounding Ole Miss’ highest-rated signee since given his projectable 6-3, 180-pound frame, raw power, strong arm and plus speed, but Callis said Gray’s name is coming up less frequently in those conversations with teams wondering about his long-term offensive profile.

As is the case with most top high school prospects, it will come down to financial demands for Gray, whom Baseball America ranks as the draft’s 58th overall prospect and No. 3 prospect in Mississippi. He hit .491 as a senior with 16 doubles, five triples and six home runs.

“If he wants first-round money, he’s probably not going to get it,” Callis said. “But if you can sign him in the second round, there will be teams that pay him in the second round. The tricky thing with all of these guys is it just takes one team. I have a feel of what the consensus is, but usually you’re drafted by the team that likes you most. That one I think could really go either way.”

Fivay (Florida) High standout Gunnar Hoglund is another signee to watch. The 6-4 right-hander has seen his draft stock soar with a low-90s fastball and elite command. He posted a minuscule 0.27 earned run average in 52 ⅓ innings this season while racking up an eye-popping 105 strikeouts against just two walks.

Watson Chapel (Arkansas) High left-hander Kaleb Hill and Westminster Christian Academy (Missouri) third baseman Kevin Graham are other signees to keep an eye on, but Callis said he doesn’t see Ole Miss losing either of them to the draft.