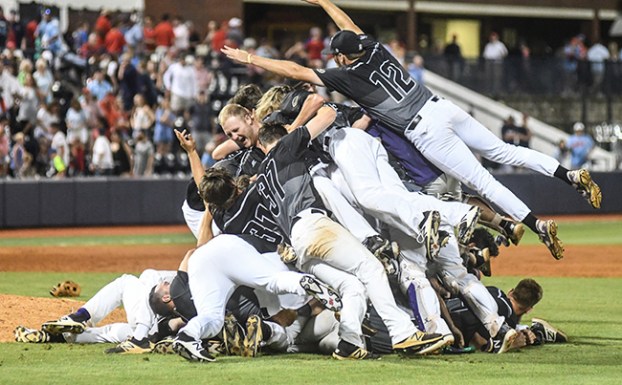 Tennessee Tech came into Oxford-University Stadium and did what no other team has been able to this season.

Now the Golden Eagles will continue their upset run in the NCAA Tournament while Ole Miss is left to deal with the reality that one of the best seasons in school history is abruptly over.

That’s because Tennessee Tech won not one but two games on the final day of the Oxford Regional to shock the No. 4 national seed. After routing Ole Miss in the teams’ first game Monday to force a winner-take-all tilt for the regional championship, Tech pieced together enough pitching to silence the SEC’s top offense for a 3-2 win in the nightcap to become the first Ohio Valley Conference team to ever advance to the super regionals.

“These guys are resilient,” Tech coach Matt Bragga said. “I said it yesterday and I’ll say it again. It’s a fighting group.”

Tennessee Tech (52-10), which won three games in a 24-hour span after being sent to the losers’ bracket by Ole Miss (48-17) in the teams’ first meeting Sunday afternoon, will take the nation’s most wins to Austin this weekend needing two wins over No. 13 seed Texas to advance to the College World Series. Meanwhile, a season in which Ole Miss won the SEC West, earned the highest NCAA Tournament seed in program history, tied the record for single-season wins and won all but six of its 36 home games ended with the Rebels dropping back-to-back games at Swayze Field for the first time all year.

“Unfortunately as a coach, you’re never prepared for that final talk or that final message,” Ole Miss coach Mike Bianco said. “It usually takes you a few days to kind of wrap your head around it, but in an instant, obviously just disappointed that for this team, it ends this way.”

Ole Miss got the tying run on in the ninth when Chase Cockrell singled with one out, but he never moved as Tech’s Nick Osborne (2-0), who doubles as the Golden Eagles’ everyday right-fielder, got Jacob Adams to fly out and Grae Kessinger to pop up to end his third and final inning of scoreless inning of relief. It was a microcosm of the day-long offensive struggles for the Rebels, who stranded 14 baserunners and, outside of a five-run eighth in a first game that was well in hand for Tech at that point, mustered just two runs in 17 innings against six Tech pitchers, including a reliever who made just his second career start in the first game and one that started the nightcap with a 5.97 earned run average in 34 ⅔ innings.

“No matter the velocity or whatever from the pitcher, they ran out some good pitchers and we were having a tough time seeing it and putting good swings on it,” said outfielder Thomas Dillard, who had two of the Rebels’ eight hits in the second game.

The latter was right-hander Devin Lancaster, who matched zeros with Ole Miss’ Jordan Fowler for five innings until Grae Kessinger broke the scoreless tie with solo home run to start the sixth. Lancaster scattered four hits before turning things over with one on and out in the frame to Tech ace Travis Moths, who threw 90 pitches in a start Saturday and three more in Monday’s first game.

Cole Zabowski got to Moths for an RBI single to push Ole Miss’ lead to 2-0, but Moths stranded the bases loaded with back-to-back strikeouts of Tyler Keenan and Chase Cockrell. Coming off six scoreless innings against Texas A&M in last week’s SEC Tournament, Fowler yielded just four hits, struck out two and retired eight in a row at one point before plunking Chase Chambers in the sixth.

Trevor Putzig tied it on Fowler’s next offering with his 17th homer over the wall in left, chasing the freshman left-hander.

“I was looking fastball and saw a curveball out of his hand, and it was up,” Putzig said. “When I hit, it felt pretty good. Luckily it went out.”

Parker Caracci came on with runners on the corners and nobody out in the eighth and struck out Brennon Kaleiwahea before Kevin Strohschein’s sacrifice fly to right gave Tech the lead. Ole Miss put runners on in the seventh, eighth and ninth but finished just 3-for-13 in those situations.

“We just came up a little short,” Bianco said. “They played really well, and they beat us.”

Ole Miss’ Ryan Rolison was taken with the first round of the Major League Baseball First-Year Player Draft on Monday.... read more