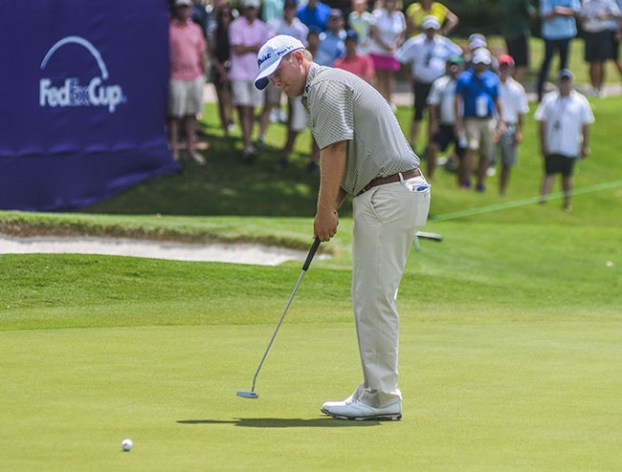 Braden Thornberry returns to the FedEx St. Jude Classic no longer under the radar

That changed after one week in Memphis. Thornberry shot up the FedEx St. Jude Classic leaderboard during the final round, finishing inside top-five and two shots back of eventual winner Daniel Berger.

Four more PGA Events later Thornberry is an unknown no longer. On Thursday The Ole Miss junior held court in the media center fielding questions during his own private press conference.

On a dry-erase board containing media availability times for Phil Mickelson and Dustin Johnson also had Thornberry’s name listed right above them.

“Brandt Snedeker and Johnson Wagner, those guys walk up and call me by name,” Thornberry said. “I guess I’m important enough for them to remember me. That’s pretty cool.”

The success Thornberry has achieved over the past 365 days is nothing short of incredible. From making his first PGA Tour start last year in Memphis to playing three other PGA Tour stops and in Oxford’s debut event on the Web.com Tour in April. Of those four tournaments Thornberry missed one cut.

Memphis is becoming the epicenter for Thornberry’s golfing success. Something not even he saw coming. The memorable moments continued for the Olive Branch native on Monday, qualifying for next week’s U.S. Open with a Top-5 finish in the Memphis sectional.

This city means a lot to the man his Ole Miss teammates call ‘Teddy.’

“I didn’t know if (Memphis) would mean that much to my golfing career,” Thornberry said. “The city is just special itself. Just being around this area I couldn’t really ask for a better spot with the golf courses that are set up and the people around here. I really like it.”

The focus for Thornberry now shifts to this week’s FedEx St. Jude Classic. It could be another special Memphis moment with this year being the final year for this tournament before it becomes the World Golf Championships-FedEx St. Jude Invitational in August 2019.

Competing and winning this week is still the main goal but after earning a spot in the nation’s national championship next week in Southampton, New York the approach becomes a two-pronged attack in preparing for his first appearance in a major championship.

“It’ll be a little bit of a tune up for me but at the same time this is my home event for me so I’m putting all my effort into this week right now and we’ll worry about next week when Monday comes.”

While keeping the focus on trying to snag his fist PGA win Thornberry can get a little U.S. Open advice as he walks TPC Southwind this week. Caddying for him is Matt Achatz who was on the bag for Rocco Mediate during the 2008 U.S. Open. Mediate lost to Tiger Woods in a playoff in what is considered one of the best battles in the history of the championship.

Coincidentally, or not, the 2008 U.S. Open is the first golf tournament Thornberry remembers watching as a kid.

Making the U.S Open field as a qualifier became a legitimate goal for Thornberry four years ago. He had tried to qualify two previous times before breaking through this year.

With the success piling up the inevitable question of going professional begins to loom larger with the summer before Thornberry’s senior year upon him. He decided to stay in school last summer and the rush to make a decision on the future is not at the forefront of his mind.

“Obviously the plan right now would be to return to Ole Miss since I’m playing as an amateur this Summer,” Thornberry said. “Ole Miss is a special place to me and pro golf will always be there so it’s not much of a rush. What coach (Chris) Malloy and coach (Kyle) Ellis are doing down at Ole Miss and some of the recruits we have coming in, it’s going to be a real special year next year and I’d like to be a part of it.”

Two more Ole Miss players came off the board on the second day of the Major League Baseball First-Year Player... read more