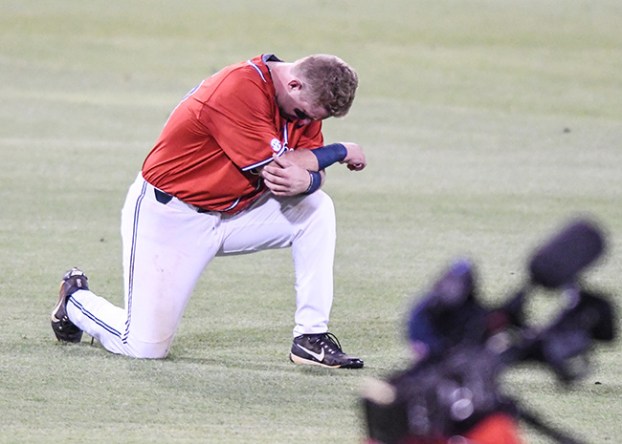 For one of Ole Miss’ most accomplished teams, season’s abrupt end ‘really hard pill to swallow’

Most of the fans clad in red and blue inside Oxford-University rose to their feet, wondering if this could actually be the end.

Some stood with their hands in their pockets or with their arms folded, intently hoping for the best. Others held their hands together near their face or cupped them around their mouth almost as if seeking the help of a higher power.

But even before Tennessee Tech’s John Ham made the catch, some of them started heading for the exits knowing their prayers weren’t going to be answered.

Grae Kessinger’s infield popup sealed the Golden Eagles’ second win over Ole Miss on Monday and an upset run to the Oxford Regional championship. Ole Miss had all the momentum after sending Tech to the losers’ bracket in the teams’ first regional matchup Sunday afternoon and needing just one win Monday to advance to the super regionals for the first time since 2014, but the Golden Eagles took it back with a 15-5 pummeling in the first game before rallying for a 3-2 victory Monday night.

And just like that, it was all over for an Ole Miss team that LSU coach Paul Mainieri lauded as “an Omaha team and one that can win a national championship” after the Rebels ran roughshod over his Tigers eight days ago to claim their first SEC Tournament title since 2006. Ole Miss also won the ultra-competitive SEC West during the regular season, earned the No. 4 national seed for its highest NCAA Tournament seed in program history and tied the school record for wins in a season, but all of that is now a footnote in a season that came to a stunning end at home, where the Rebels hadn’t lost back-to-back games all season before Monday.

“I told them it’s the best team that I’ve ever coached,” Ole Miss coach Mike Bianco said. “Yeah, we’ve had teams that went further in the postseason, but nobody’s played as well as this team has, consistently well, for whatever amount of games we’ve played from Day 1 to tonight. Unfortunately we didn’t play great today, and we needed to.”

Ole Miss’ pitching struggled to contain the nation’s top offense with James McArthur giving up four runs in less than three innings in the first game, which essentially forced Bianco to throw some of his seldom-used arms to the wolves in the later innings in order to save the bullpen for the rematch. Jordan Fowler held Tech down for five innings in the nightcap before Trevor Putzig tagged the freshman for a tying homer in the sixth as Tech scored all of its runs in its final three at-bats.

But Ole Miss’ lineup was supposed to be able to keep up against a Tech team that was low on pitching. The Golden Eagles turned to some seldom-used arms, including reliever Ethan Roberts, whose only other career start came two years ago, and Devin Lancaster, who began the day with an ERA just south of 6.

Yet the SEC’s top offense was baffled.

Outside of a five-run eighth in the first game that proved inconsequential given Tech’s 10-0 lead at the time, Kessinger’s leadoff home run in the sixth inning of the second game followed by Cole Zabowski’s RBI single were the only runs Ole Miss mustered on the day. The Rebels combined to hit .239 (16-for-67) in their final two games and had just four at-bats with runners in scoring position in the nightcap.

Two of those came with the Rebels trying to add on to their 2-0 lead in the sixth against Tech ace Travis Moths, who came on in relief after throwing 90 pitches in a start two days earlier and walked Will Golsan to load the bases with one out. But Moths struck out Tyler Keenan and Chase Cockrell to keep the Golden Eagles close before Putzig connected on his two-run homer in the bottom half of the inning to ignite Tech’s rally.

“We definitely wish we could’ve gotten a few more runs (in the sixth), but we just always talk about getting runners on, setting up guys in scoring position and then hit away,” Kessinger said. “Just wasn’t able to work out.”

Nine outs later, it was Tennessee Tech’s players dogpiling on the mound to celebrate a super regional berth. The scene brought with it the sudden reality that one of the most accomplished teams in Ole Miss history is done trying to add to it.

“It kind of takes you by shock,” outfielder Thomas Dillard said. “You have all these plans with supers and Omaha and how long we can play in Omaha, but for it to end like this … it’s just a really hard pill to swallow.”