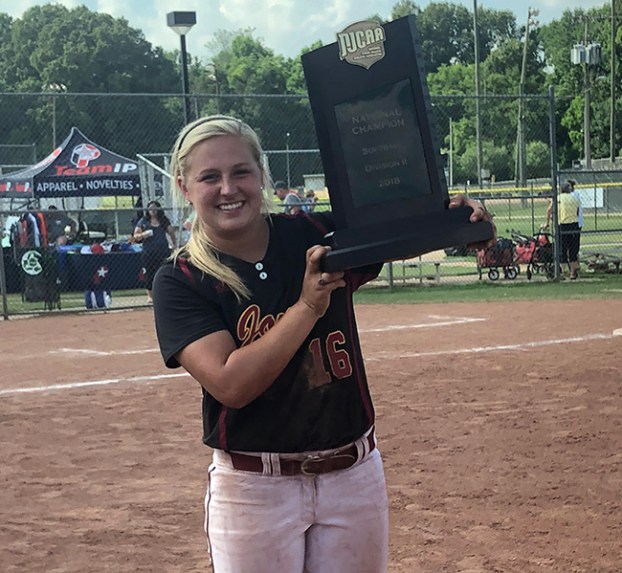 Two years ago, Emily Robinson left the friendly confines of Lafayette High school and headed South to Ellisville. She went to Jones County Junior College to continue her softball career, not knowing what the future would hold.

JCJC defeated Phoenix College (Arizona) 18-2 in the championship game held at Traceway Park in Clinton after finishing as runner-up a season ago. Robinson was a big part of the title game, and the season as a whole.

“They were a close knit bunch that played together,” Jones County coach Chris Robinson said. “It was very, very special for them to feel the highest of the highs. That’s all those sophomore talked about was getting back to (the championship game).”

Robinson entered her freshman campaign in 2017 not guaranteed a place in the lineup. Jones County already had a shortstop — Robinson played that position at Lafayette — and the only way she could find playing time on the field was either at second or third base.

Batting in the sixth spot in the lineup, Robinson accepted her new role and excelled, hitting .362 her freshman season for 27 runs batted in and three home runs. She had 10 extra base hits. The adjustment from high school to the college level came easy.

This season brought even more success for Robinson at the plate. In her sophomore campaign, she raised her batting average by 74 points (.436) to lead the Bobcats. Her RBI production went up by 37 and she hit seven more home runs.

In the national championship tournament, Robinson went 10-for-17 (.588) and had four RBIs and scored 10 runs.

“I think she just came in with a lot of determination,” Chris said. “I think our hitting coach Katie Durham had a lot to do with Emily, as well. She changed just a couple things with her swing and Emily’s power numbers went up.”

The national championship capped a career at Jones County for Robinson and the rest of the sophomores, who became the winningest class in program history with 109 wins over two years. For Robinson, it also put a bow on her competitive softball career. She will begin classes at the University of Southern Mississippi in the fall, majoring in sports medicine.

“It wasn’t my plan but different things work out,” Emily said. “I’ll be coaching some little (league) teams and stuff here and there. I’m not quite done with it.”

For one of Ole Miss’ most accomplished teams, season’s abrupt end ‘really hard pill to swallow’

Most of the fans clad in red and blue inside Oxford-University rose to their feet, wondering if this could actually... read more