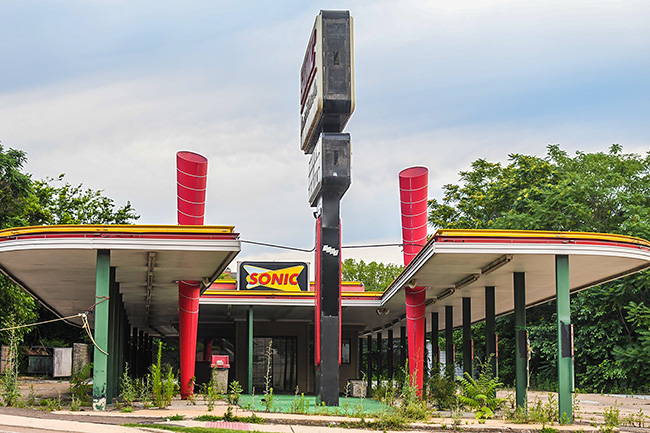 Renovations on the Sonic, located on University Avenue in Oxford, Miss. on Tuesday, June 5, 2018, should begin this summer. (Bruce Newman, Oxford Eagle via AP)

When Sonic on University Avenue closed for an undetermined amount of time, the sign promised the popular fast-food venue “would be back.”

A new Sonic was built on West Jackson Avenue last year and some Oxonians were starting to lose hope that Sonic would ever return to its spot, located behind the Chancellor House hotel.

However, Sonic fans on the east side of town will soon be able to get their favorite menu items without having to drive down West Jackson Avenue.

Owner Ronnie Solberg said renovations to the old Sonic should begin this summer.

On Monday, he presented preliminary design renderings to the Courthouse Square Historic Preservation Commission for a complimentary review before going before the commission officially in July to gain a Certificate of Appropriateness to begin renovations.

The “new” old Sonic will be redesigned to a more modern restaurant while keeping much of the nostalgic feel of the former building.

The restaurant will have charcoal colored brick massing, canopy awnings, an LED lighting border and halo channel lettering on the sign that will retain the historic Sonic lettering.

Solberg showed two versions of the building for the commission’s review that differed slightly. One had a tower on top with the Sonic sign with a flat roof while the second plan had a tower with an antenna-like finial on top to play on the word “sonic.”

One of the versions had just red accenting while the other had red and blue accents.

Most of the commissioners said they preferred the red-only accents but were torn when it came to deciding if they liked the tower with or without the antenna.

The original sign pole will remain but will be moved.

One change in the site design that was appreciated by the commission was having the parking lot go around the entire building.

“This way, people can drive around again looking for an open spot without having to drive back into traffic, turning around and coming back in,” Solberg said.

The commission directed Solberg to bring back renderings that showed the LED lighting on the outside of the awnings or inside and more hidden, with the light casting downward.

The commission took no action since Solberg’s presentation was only a complimentary review for guidance.