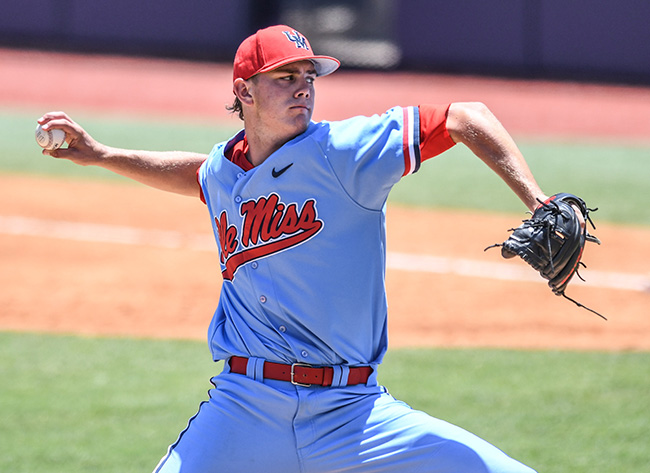 Major League Baseball’s First-Year Player Draft concluded Wednesday with four more Ole Miss players being selected. It started with James McArthur going in the 12th round to the Philadelphia Phillies and ended with Parker Caracci being taken by the Toronto Blue Jays in the 37th round.

Ryan Olenek (17th round, San Francisco Giants) and Will Golsan (26th round, Colorado Rockies) were also picked, giving Ole Miss seven draft picks in all. It’s the 15th straight year the Rebels have had at least four players drafted.

Golsan is the lone senior of the group, leaving the rest with the choice of returning returning to school or getting their professional careers started early. The deadline for teams to sign their draft picks is July 15, though many drafted underclassmen will reveal their intentions much sooner than that.

Sophomore Ryan Rolison has almost certainly thrown his last pitch for Ole Miss after being taken by the Rockies on Monday with the 22nd overall pick, a slot that has a recommended signing bonus of $2.91 million. The same goes for fifth-rounder Brady Feigl, a fourth-year junior whose selection as the 243rd overall pick to the Oakland Athletics comes with a slot value of $368,200.

Nick Fortes is likely gone, too, after the Miami Marlins grabbed the junior catcher in the fourth round with the 117th overall pick, which is valued at $474,000.

Whether Ole Miss has to replace its entire weekend rotation will likely come down to what McArthur decides to do after the Phillies made him the 347th overall selection. The slot value for picks outside the top 10 rounds are less than $100,000, though teams can spend less of their draft pool on seniors with no leverage and use that money to pay more than the recommended signing bonuses for other players.

Olenek was taken with the 496th overall pick after the junior outfielder turned in a career year, leading the Rebels in average (.350), hits (83) and doubles (18) while posting a .388 on-base percentage. He hit a league-best .404 in SEC games and put together a 23-game hitting streak at one point, which is tied for the third-longest in program history.

Where Olenek will play at the next level is the biggest question. He’s shown versatility by playing seven positions during his career, but with little power (eight career home runs) and average speed, there’s some belief in the draft community that Olenek will have to transition to second base full-time in order to give himself the best chance to be an everyday player.

Caracci lasted 1,105 picks until the Blue Jays took the hard-throwing reliever. After not being a member of the Rebels’ active roster the previous two seasons, Caracci broke through with his most consistent fall and carried it into the spring, eventually taking over as Ole Miss’ closer.

With a fastball that can touch the mid-90s and a biting slider, Caracci posted a 2.25 ERA in 48 innings and notched 10 saves with 73 strikeouts and 14 walks. The third-year sophomore, who held opponents to a .221 average, was often called on to get more than three outs with 16 of his 27 appearances going multiple innings.

Former Ole Miss reliever Dallas Woolfolk was drafted in the 13th round by the Athletics.

A junior this season, Woolfolk was taken with the 383rd overall pick less than a month after abruptly leaving the team. Woolfolk cited his personal health as the reason for stepping away amid a trying season after the right-hander set the program’s single-season saves record (12) as a sophomore.

A preseason All-American, Woolfolk made 15 appearances this season with teams hitting .310 against him as the velocity on his mid-90s fastball slipped considerably. He lost his closer’s role at the start of SEC play and made just five league appearances, pitching just once in his final three weeks with the team.