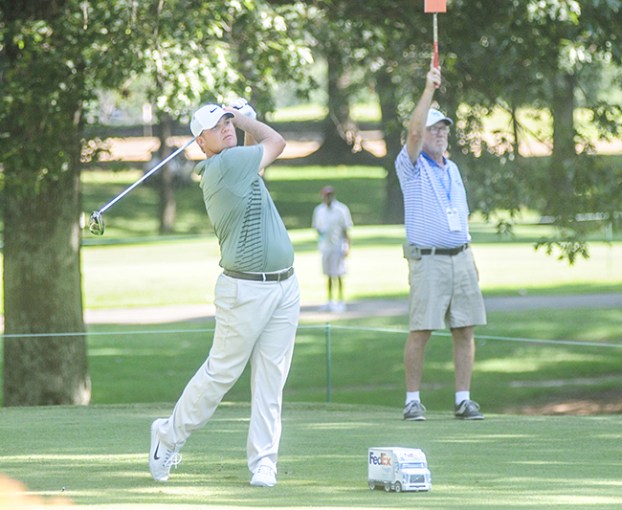 Braden Thornberry tees off at the 5th hole of the FedEx St. Jude Classic at TPC Southwind in Memphis, Tenn. on Thursday, June 7, 2018. Thornberry shot an opening round 73 to finish three-over.

MEMPHIS — The first round of preparation towards next week’s U.S. Open gave Braden Thornberry a little of everything he can expect in New York.

The Ole Miss golfer grinded out a three-0ver 73 in his first round at this week’s FedEx St. Jude Classic at TPC Southwind on Thursday. He is eight shots back of leader Seamus Power who shot a five-under 65.

A round that started with promise after making a birdie on his first hole turned into one with struggles off the tee and working out of trouble in the trees and finished with a bogey-bogey finish on holes 17 and 18.

“The course is playing pretty much the same as last year,” Thornberry said. “I just didn’t have the best game today tee to green. I thought I chipped and putted and scrambled around pretty well. It’s kind of disappointing to go bogey-bogey.”

Following the opening birdie, Thornberry’s adventures began on the par-five third hole. A tee shot that went left into the trees landed on a root, which caused his next shot to not go much further. The approach shot — that was sitting in a divot — to the green landed within six feet of the hole and Thornberry converted the par save.

The misses left with the driver continued throughout the round with Thornberry hitting only three of 14 fairways.

“It was mainly driver. Irons, I think that was from hitting it bad off the tee,” Thornberry said. “I don’t think it’ll be a big problem.”

Thornberry will have a good idea of where he stands in relationship to the cut line being one of the final three groups to tee off on Friday afternoon (1:40 p.m.).

Two of the biggest names in this week’s field put themselves into contention after the first day. Phil Mickelson and Brooks Koepka both shot opening round 66s to finish at four-under. They are part of a group of 11 players who are one back of Power.

Mickelson has found his groove in Memphis, placing inside the top 10 in four of his last five starts at TPC Southwind. Late in last year’s final round Mickelson had sole possession of the lead before faltering late.

“I really, really enjoy this golf course,” Mickelson said after a practice round on Wednesday. “I think it’s the most underrated on Tour. I’m really excited we are coming back here for a Wold Golf Championship to end our season-long race next year. It’s quickly becoming one of my favorite events.”

For Koepka it is all about getting tuned up for next week’s title defense at the U.S. Open. Koepka won his first major championship at Erin Hills in Wisconsin last year by five strokes. He started his round with a birdie on No. 10 and finished with five more on his round, but two bogies at holes seven and 12 derailed his momentum.

“I thought (the course) was set up really well,” Koepka said. “Unfortunately, I didn’t play that great, but scored a lot better than I played. It was kind of a weird round. Played good for a little bit of a stretch and then kind of sloppy. But four-under, I’ll take it.”

Two-time defending champion Daniel Berger shot an even round of 70 to begin his quest for a third consecutive title.