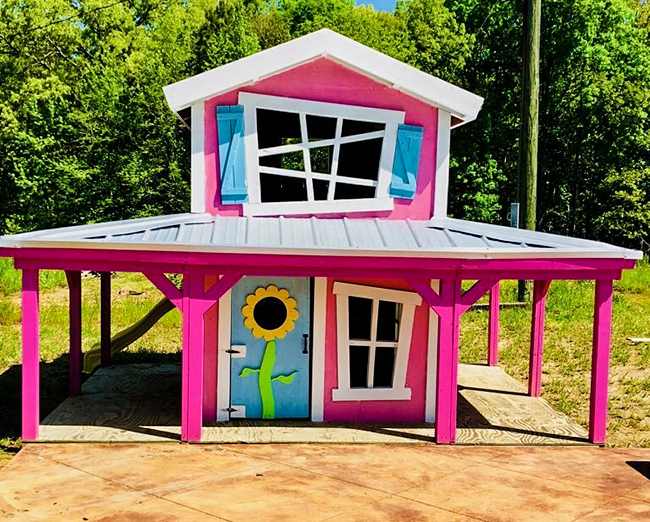 In a world of iPads and video games, Pontotoc-based Outdoor Creations is encouraging children to get outside and use their imaginations in custom swing sets and playhouses.

Owner Jason Owen said he got his start in 2013, when his church wanted a model of Noah’s Ark for its nursery. No one else had volunteered, so Owen said he stepped up, even though he was inexperienced in woodworking.

Since then, the company has expanded tremendously, with over 300 custom playhouses and play sets sold over the last five years. Outdoor Creations is a venture Owen said he’s lucky to be part of.

“It’s been a blessing. I mean, we’ve been everywhere. I just about think we’ve been to every county in Mississippi,” Owen said.  “We’ve been just about all over Arkansas and Alabama, and we had a lady send in a deposit this morning from Jackson, Tenn. so we’ve got to go up there. We even went to New Orleans about two months ago.”

The business has become so profitable, he said, that he was able to quit his factory job at Pontotoc Spring and now works with his son-in-law Austin Blansett full time. Since June, the pair has made 59 custom-designed units, all from a shed in Owen’s back yard. By the end of the year, the total is expected to surpass 120, he said.

The play sets range from $2,200 to $2,700, depending on amenities, and can take anywhere from four and a half to 10 hours to complete. Most follow a basic design, Owen said, featuring slides, a rock wall, swings and a custom metal roof.

The real centerpieces, however, are the playhouses. Each playhouse is designed to the customer’s specifications, takes at least 30 hours of labor to complete and can run in the $3,000 range. Designs range from cartoonish to colonial, and Owen said the amenities can be as elaborate as the customer wants.

He and Blansett have built playhouses with sliding glass windows, air conditioners, wrap-around porches, lofts, slides and more. Whatever the customer dreams up is what they try to create, Owen said. However, after five years, he admits most customers trust his judgment and let him be as creative as possible. Owen also said he’s willing to modify the houses to meet specifications of city ordinances and homeowners association guidelines.

“We’ve got a good many over in Oxford, in the subdivisions. We took a monster truck over to Wellsgate last week, and sent an Ole Miss house over to Oxford about two weeks ago as well,” Owen said. “ A lot of the subdivisions, they restrict and won’t let them have but certain colors, especially down in the Madison area. We’ve had to put architecture shingles on a good many down there, because they don’t want metal roofs.”

Outdoor Creations also constructs commissioned pieces, including a John Deere tractor for a Delta farmer’s son and a fire station for a firefighter’s daughter. A trucking company in Picayune, Miss. has a custom-built diesel truck playground as well, and the pirate ship playground at Oxford Church of Christ is also one of his designs.

Owen said the majority of his customers either see the playhouses in their neighbor’s backyards, or on the Outdoor Creations Facebook page, which has almost 7,000 likes from fans across the country. Fans shouldn’t expect to see a website for the company any time soon, though.

“We’ve thought about a website and expanding out further, but we stay so busy,” Owen said. “I think right now there are 31 right now waiting on the list to be built.”

Thirty-one projects might seem daunting to the inexperienced man, but Owen said that’s nothing compared to Christmastime. Christmas orders are usually cut off in October, and then Owen and Blansett said they spend the month of November building and deliver the finished products nearly every day of December.

This past year, they worked right up to December 23. Seeing all the houses in his yard is something Owen said makes him smile.

“We call it ‘Whoville’ out here during Christmas time. This past year, we had 16 of them lined up out here. Most of them were the play sets, but several of them were playhouses,” he said. “This is the real Santa Claus right here. But we enjoy it, because it’s worth it to see the kids’ faces.”

Owen sources all his materials from local businesses, and personally delivers each project, even if that means driving hours away.

Most of the lumber and other materials come from Murphy’s Frame Supply in Bruce, and all of the sheet metal comes from Mississippi Metal in Pontotoc. Moore’s Feed storeowner, John Moore, cuts all the metal to Owen’s specifications.

In the future, Owen said he wants to expand the company and build a bigger workspace on his 18-acre property. Until then, however, he said he’s content with the way things are going and thankful he can use his talent for others.

“This past year, we worked with the Make A Wish Foundation for a little guy in Tupelo, and we took a play set down to him,” Owen said. “We’ve got a benefit auction this Saturday. It’s fun to be able to help out a little bit. It’s a blessing.”

To learn more about Outdoor Creations, visit their Facebook page at http://facebook.com/outdoorcreations13.