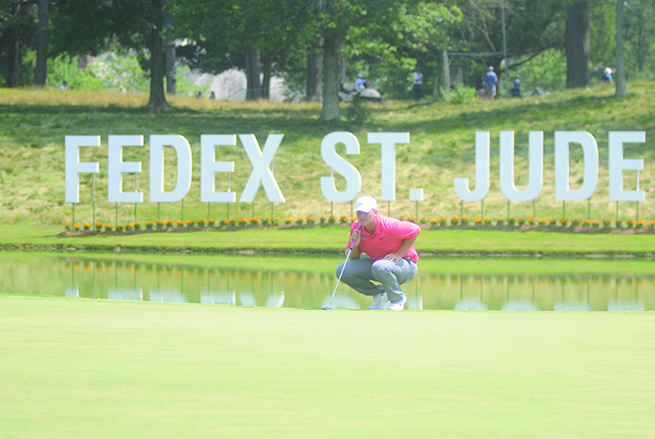 Braden Thornberry lines up a putt on the Par-3 14th hole during his second round of the FedEx St. Jude Classic at TPC Southwind in Memphis on Friday. The Ole Miss golfer shot 66 to make the cut and will play this weekend.

Braden Thornberry has been in this very same position before. In his PGA Tour debut he hung around the cut line on Friday afternoon before getting just inside the number and making a run on the weekend to a top-five finish.

He is hoping for another magical weekend around TPC Southwind.

With par saves and scrambles around the greens mixed with hole outs from the fairway, Thornberry’s second round at the FedEx St. Jude Classic had it all. The Ole Miss golfer shot a four-under 66 to to stick around for the weekend, sitting at one-under overall for the tournament.

It is his third made cut in his first four career PGA Tour event starts. He trails Dustin Johnson by nine shots who shot a seven-under 63 for a one-stroke lead.

“Same position I was in last year. Got off to a rough start,” Thornberry said after his round. “I think it might be a little bit to do with ‘you don’t play in a lot of PGA tournaments.’ A little shaky, a little nerves here and there. I was able to figure out what I was doing wrong tee to green and right that ship a little bit.”

Just like he did on Thursday, Thornberry got his round started with an opening birdie. From there the potential for the tournament to get away from him lingered the rest of his opening nine holes.

Finding water on hole 12 off the tee forced Thornberry to have to be nearly perfect from 165 yards away. He was and made par. Scramble saves on holes 13 and 15 also kept the wheels on his round.

“I was kind of holding on for a couple (holes),” Thornberry said. “To get up and down from 165 on 12 after hitting it in the water. That was big and then I had a plugged bunker shot on the next hole. I just kept myself in it and when I started to play some good golf and hit it up there and give myself chances I was able to take advantage of it.”

Thornberry followed up a opening two-under 33 thru his first nine holes with birdies on two of his first three holes to start his back nine.

The first only blemish on the round was a bogey at the fourth after being unable to get up and down from just off the green. Thornberry followed the bogey with a chip-out in the fairway from 84 feet away for a bounce-back birdie.

The gallery that followed him all afternoon let out the loudest cheer of the round.

“That was a Tiger roar,” one patron said.

“We call that a Teddy roar around here,” replied another.

There will be plenty more opportunities to provide more ‘Teddy’ roars on on Saturday. Thornberry will tee off for his third round at 8:37 a.m. CT and is paired with Brice Garnett.