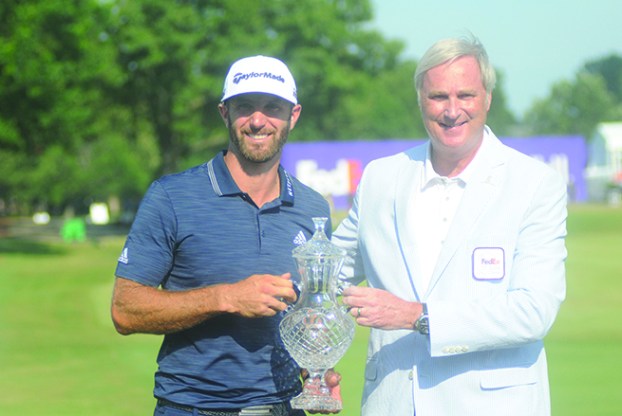 Dustin Johnson poses with the FedEx St. Jude Classic trophy after winning the tournament on Sunday at TPC Southwind on in Memphis on Sunday. It is the second time Johnson has won the event.

Dustin Johnson runs away with second St. Jude title; Thornberry has up and down final round

MEMPHIS — Dustin Johnson was going to win his second FedEx St. Jude Classic title but that didn’t stop him from becoming the new No. 1 golfer in the world in style.

From 171 yards out on his final hole, Johnson sank his approach shot to cap his victory with an improbable eagle. He already had a four-shot lead over Andrew Putnam heading to the 18th hole but the emphatic nail in the coffin gave Johnson a six-shot margin at 19-under par.

The win was Johnson’s 18th in his career and vaulted him to the No. 1 ranking in the Official World Golf Rankings, passing Justin Thomas who took over the top spot on May 13. Thomas supplanted Johnson, who had a 63-week reign as the world’s best golfer.

“To finish the way I did was really cool,” Johnson said. “I knew coming into this week I was playing really well and (TPC Southwind) is a golf course I’d had success at so I liked my chances a lot. I played really well all four rounds.”

This was the second St. Jude title Johnson has claimed, winning the tournament for the first time in 2012.

The course played more than a stroke harder on Sunday than it had the previous three days but that did not deter Johnson, who shot a four-under 66 in the final round. After a birdie and a bogey on his front nine holes, Johnson followed birdies at 13 and 16 before the eagle at 18.

Heading into Sunday, Putnam shared the 54-hole lead with Johnson at 15-under but a final round 72 would derail the 273rd ranked player in the world a chance at his first career win on Tour.

The day was also one of disappointment for Ole Miss’ Braden Thornberry. The Olive Branch native shot a third round 66 to get to six-under and inside the Top-10. A run at the leaders for the tournament title was a long-shot but a second consecutive Top-five finish was well within reach.

It was not to be with Thornberry also shooting a tw0-over 72 to finish his fourth PGA Tour event at four-under and in a tie for 26th.

“It was a good week,” Thornberry said. “It’s always such a cool week that I look forward to all year and with a company like FedEx supporting it and for St. Jude, it’s just a really cool week all around.”

An opening bogey was followed by a string of pars on the front nine but Thornberry’s final round took a disastrous turn three holes into his final nine. A triple-bogey on the par-four 12th hole after Thornberry sailed his approach shot over the green and into a hazard dropped the Rebel down the leaderboard.

With birdies on 13 and 16 mixed with a bogey on 15, Thornberry was able to close out his tournament on a positive note. From 148 yards on in the fairway on 18 he stuck his approach shot to within six inches for a tap-in birdie to send the fans who cheered him all the way up the fairway to the green home happy.

“The hometown crowd has been huge for me this week,” Thornberry said. “All the ‘Hotty Toddys’ and the Memphis people that have been following me around, it’s been really special. I wouldn’t trade it for anything.”

Following the round Thornberry headed straight to airport to catch a flight with the rest of the players who were heading to Southampton, New York for this week’s U.S. Open at Shinnecock Hills Golf Club.