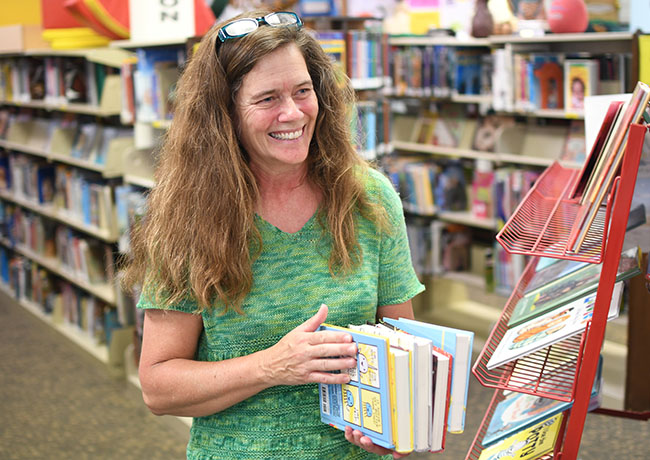 Nancy Opalko, at the Lafayette County and Oxford Public Library in Oxford, Miss. on Monday, June 11, 2018, is retiring at the end of the month.

To the children who visit the Lafayette County  and Oxford Public Library, her voice might sound like some of the puppet characters who have entertained them for years.

But Nancy Opalko, the Children’s Librarian, will soon be stepping down from the stage to enjoy her retirement.

Prior to working at the library, Opalko received a bachelor’s degree in English from Coastal Carolina University. She then came to Oxford to get her master’s in English at Ole Miss.

Opalko started working at the library in 1994 as a substitute librarian assistant.

“The library was a lot smaller then,” she said. “It was much smaller physically, and the children’s section was upstairs. We really worked to build what we have now.”

Opalko thanks her mother for encouraging her to get a master’s in library science at the University of Alabama. While she was taking classes, Opalko worked part-time at the library and drove once a week to Tuscaloosa.

After working some years as a librarian assistant, she became the children’s librarian. With youth services, Opalko helped direct children’s programs such as the summer reading program. She also helped to create new programs such as puppet shows and various book clubs like Nerds, Ice Eaters and M.A.D. Girls.

“I love programming inside and outside the library,” Opalko said. “ My favorites have been putting on the puppet shows and running the puppet workshops.”

Since Opalko started working with youth services, the library has increased its afternoon programming and added programs on the weekend.

This year will mark Opalko’s 25th at the library. She will retire at the end of June.

Following retirement, Opalko said she plans to spend time with her husband, four dogs and three cats. She also hopes to ride her bicycle, take an art class and knit more.

“I am going to try new adventures and enjoy traveling, sports and spending time with friends and family,” Opalko said. “I’m open to all possibilities.”

Opalko still plans to volunteer with the Lafayette Literacy Council and to read at veterans homes.

Opalko will celebrate her retirement after her last puppet show on June 29 at 10:30 a.m. After the show, cake and popcorn will be served to the public.

“I have learned so much from Ms. Nancy about library programming for youth,” Carla Fulgham, library assistant, said. “We do a book club together, Ice Eaters, and we are really going to miss her.”