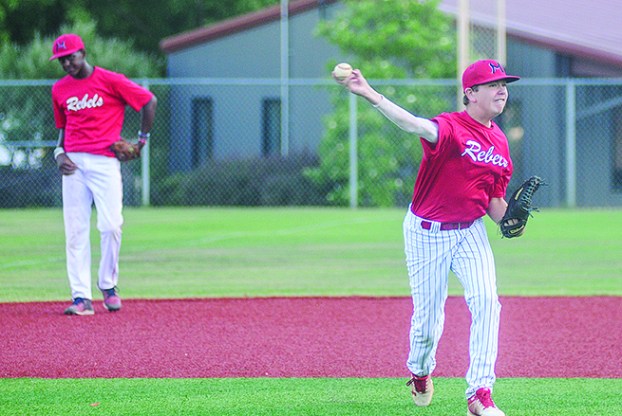 Ben Basil of the Mississippi Rebels makes a throw to first base during practice at FNC Park last Wednesday. The Rebels will compete in the U12 group of the Omaha Slumpbuster national tournament this weekend.

Mississippi Rebels to play in national tournament in Omaha

Even with the disappointing results in the Oxford Regional earlier this month there will be a team of Rebels playing competitive baseball in Omaha, Nebraska.

The U12 Mississippi Rebels are competing in the Omaha Slumpbuster this weekend, beginning on Thursday. It is a tournament comprised of over 550 teams across several age groups. The event is also broken up into four sessions with the Rebels competing in Session 1.

“We’re excited,” Harry Rayburn, coach of the Mississippi Rebels, said. “It’s for sure something they’ve been talking about all year. …these boys are good players and will definitely compete. Whether win, lose or draw I do will be very competitive with these other teams.”

The Rebels will be competing against teams from Wisconsin, Florida, Idaho, Colorado, Georgia, Missouri and others over the course of a three-day span. Beginning Friday the Rebels will open up pool play before moving into either the championship or consolation bracket.

This weekend is the culmination of he past four years. This will be the final games the Rebels play as a team before they move on to the next level, which is junior high school baseball. Rayburn and his coaches wanted a way to cap off and celebrate the years of success the team has had.

“This is my last year to coach so this is kind of our last big tournament,” Rayburn said. “I guess we haven’t really talked about it much. We just kind of try and stay in the moment and get the boys ready. We’re really not talking about the end much. It’s just kind of ‘hey, lets play and have fun and do what we do.’”

Heading into this weekend in Omaha the Rebels competed in a couple other tournaments. This past weekend they played in the USSSA Global State Championship in Tupelo and last month they claimed the title of the Memorial Day Bash tournament held in Cordova, Tennessee.

Getting to Omaha did not require winning a championship, instead money had to be raised for Rayburn to get his team into the Slumpbuster. With the help of several businesses in Oxford and Tupelo along with the players raising money the Rebels were able to get to play in Omaha.

The initial plan was to try and catch a game or two of the College World Series at TD Ameritrade Park, thinking Ole Miss would find their way there for the first time since 2014. Instead Rayburn is taking his team to Kansas City to watch the Royals take on the Cincinnati Reds on Wednesday before arriving in Omaha on Thursday.

The Rebels first pool game is at 8 a.m. Friday morning against the Mid-Missouri Express.

Parker Caracci’s breakout season has earned him the chance to compete for his country. Caracci on Monday was named to... read more