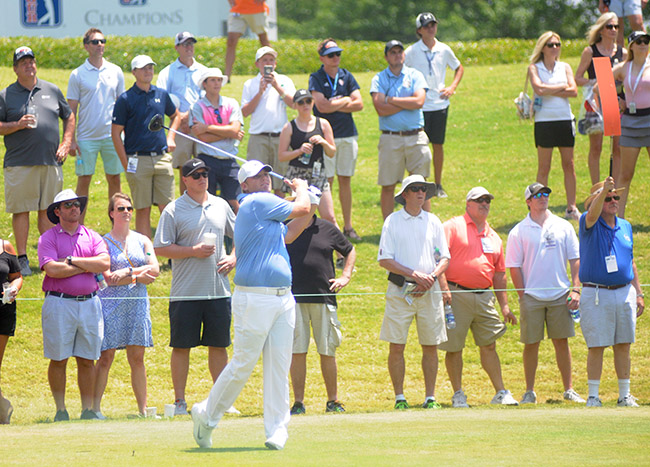 The first golf tournament Braden Thornberry remembers watching when he a kid was the 2008 U.S. Open. Now, 10 years later some young aspiring golfer will be sitting in their living room watching Thornberry.

The Ole Miss golfer will play in his first major championship this week after finishing in the Top-10 at the Memphis sectional qualifier last Monday. Thornberry joins 18 other amateurs who be a part of the field at Shinnecock Hills Golf Club in Southampton, New York.

Thornberry has played in five PGA events since making his PGA Tour debut last year in Memphis. The 118th U.S. Open will be the biggest stage the former NCAA Champion will compete on to this point in his amateur career.

Playing with the world’s best has not fazed Thornberry, when playing, who uses the mentality of belonging amongst the elite players and thinking he’s one of the best out on the course.

“Just being there kind of helps feel that way,” Thornberry said. “I was given a spot (in the St. Jude field) but I earned the spot (at the U.S. Open). It’s not hard to make yourself feel unwanted out there.”

Just showing up and participating is not on Thornberry’s agenda, being in contention for the nation’s national championship is.

Amateurs have the U.S. Open, though the occurrence is few and far between. The last player to win the championship as an amateur was Johnny Goodman — who was an Omaha insurance salesman — in 1933 to claim the 37th U.S. Open title. Bobby Jones won as an amateur four times.

“Obviously I’d like to get up there and contend,” Thornberry said. “It seems like almost every year there is an amateur or two that plays really well and is up there near the lead, especially in through the first and second round and I’d like to make that through the fourth round.”

Not only is it Thornberry’s first time playing in a U.S. Open but it is also the first time playing at Shinnecock Hills. He flew up to New York with a host of other players Sunday night after the conclusion of the final round of the FedEx St. Jude Classic in Memphis and has played practice rounds the past three days.

On Tuesday Thornberry played with Brandt Snedeker. Thornberry is paired with Snedeker and Jason Dufner in the first two rounds.

Snedeker and Thornberry has gotten to know each other since the two played a practice round in Hilton Head during the RSM Classic last fall.

Along with having a playing partner who he is familiar with and could lean on for advice, Thornberry will also have a caddy on his bag who is well-versed in U.S. Opens. Matthew Achatz caddied for Rocco Mediate in the 2008 tournament and has caddied in four others since. Achatz worked with Thornberry last week in Memphis and was asked to stay on through this week.

“It’s just golf,” Achatz said. “You try to keep emotion out of it and you try to do the best decisions that you can and that’s it.”