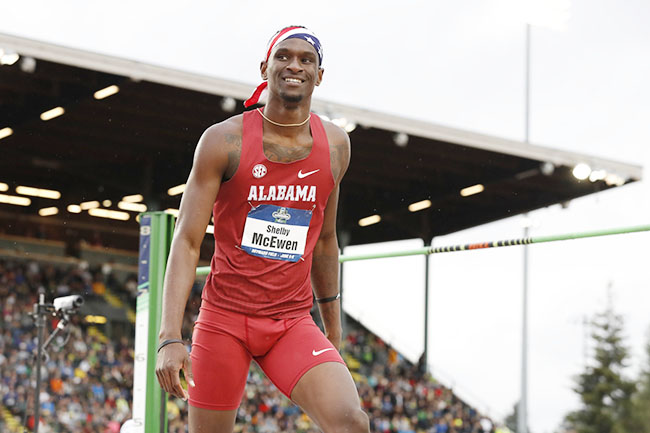 Shelby McEwen reacts after a jump in the high jump event during the NCAA Outdoor Championships at Hayward Field on the University of Oregon campus on June 8, 2018. Photo by Robert Sutton

Whenever Shelby McEwen walks by a basketball gym he gets an itch. An itch to go in and find a pick-up game or just shoot some baskets on his own.

It is an itch he knows he cannot scratch.

McEwen gave up being a double-sport athlete when he went to Alabama last summer after two seasons at Northwest Mississippi Community College. It was a decision he had to make if he wanted to succeed at the reason he went to Tuscaloosa.

The itch was not scratched and the Southeastern Conference has a new king of the high jump.

“I had to stop going to the gym as much to keep from getting hurt,” McEwen said. “My coach talked to me and said ‘I know you’re going to miss it.’ I talked to my parents about it. I go every now and then in the offseason. It was kind of hard to give up.”

Staying away from a basketball court from August to May was a sacrifice that paid off for McEwen. In his first season at Alabama McEwen won the SEC Indoor Championship title as well as the SEC Outdoor Championship.

During the indoor season McEwen finished runner-up with a jump of seven feet, six inches (2.29 meters), which was the second best jump in program history at Alabama.

“I knew I had to build my confidence more,” McEwen said. “I had a lot of confidence coming in (to Alabama) but I knew I had to get more confident with the transition from basketball to track. …It was very special. It just got better and better.”

The former Oxford Charger carried the momentum from the indoor season to the outdoor season where he continued to be one of Alabama’s best high jumpers in recent memory. McEwen won the SEC outdoor title with a personal best attempt of seven feet, four and a half inches (2.25) to claim the fourth best jump in school history.

During the NCAA East Region Preliminary McEwen qualified for the NCAA Outdoor Championships and finished runner-up in Eugene, Oregon. It was the first time for McEwen to compete at storied Hayward Field but he did not let the environment become too big and produced the first Top-2 finish in the high jump by an Alabama athlete since 1985.

“It was a big crowd indoor but once I got to outdoor down in Eugene at Hayward Field it was 11,000-plus,” McEwen said. “You got so much going on at one time. I know in one of my jumps the 400 (meter dash) was about to pop off and that was a big race. So, just have to stay focused and stay tuned in to what you’re doing.”

The next opportunity to claim gold comes this weekend at the USA Track and Field championships at Drake Stadium in Des Moines, Iowa. McEwen has the fifth-best qualifying mark (2.29M) and will go against some of the best in the country.

He will not be the only former Charger competing this weekend. Sam Kendricks will try his hand at claiming yet another national championship in the pole vault.

The possibility of two Oxford natives competing in the Tokyo Summer Games in 2020 may seem too far away to consider for some but McEwen is already bending the ear of the former Olympic bronze medalist and teammate for advice.

“Last time when I was home (Kendricks) was talking to me about just staying focused and keep working hard,” McEwen said. “Outwork somebody because there’s somebody always working harder than you.”