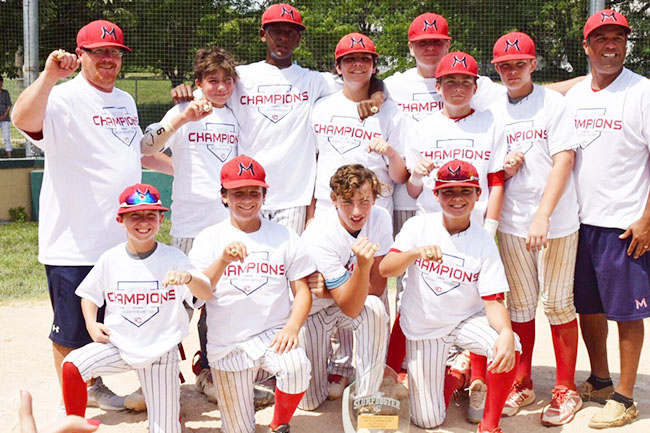 There were Rebels celebrating a championship in Omaha on Sunday, just not inside TD Ameritrade Park. Not because the College World Series is still going on but because the Mississippi Rebels were busy winning a tournament of their own across town.

The Oxford-based little league team won the 12U portion of the Omaha Slumpbuster this past weekend. The Rebels dropped only one game on their way to claiming the championship with wins against teams from across the country.

“It was (a) fantastic (weekend), coach Harry Rayburn said. “The boys had a good time on and off the field together. They played together as a team. We really played well, offensively. All aspects of the game.”

The tournament began with pool games on Friday before moving to the bracket portion on Saturday and Sunday.

The Rebels defeated the Mid-Missouri Express 4-2 in their first game of pool play in Group D. Later that afternoon they suffered their only loss of the tournament in a 10-9 defeat by the Ruff Ryderz Kauai out of Hawai’i.

With a 1-1 record in pool play the Rebels advanced to the 12U Division II championship bracket. They picked up wins over a team from Texas and another win over Mid-Missouri in the second round to advance to the semifinals. Brady Stinnett pitched a perfect game against the Express.

A 16-3 win over a team out of Overland Park, Kansas sent the Rebels to the championship game against the PAL Vipers Black from Jefferson City, Missouri. There was little drama with the Rebels winning the title in a 9-1 victory.

“We’d been playing well the last couple of weekends,” Rayburn said. “Just been hitting on all cylinders and they just continued that here.”

The tournament was a culmination of four years for the Rebels. The core group of the team will be disbanding with most of the players moving on to junior high teams at their respective schools. It is also the end of the road for Rayburn and his staff as coaches.

“I couldn’t have scripted a better ending for this core group,” Rayburn said. “The boys played fantastic and it was great to be with them and be a part of it.”

With the CWS taking place as a backdrop for the Slumpbuster some players and their families took park in the events. A few went to the opening night ceremonies while others went to watch Mississippi State defeat Washington 1-0 in the two teams’ first round game on Saturday night, the eve before winning their own title.

Why Dallas Woolfolk needed to walk away from Ole…