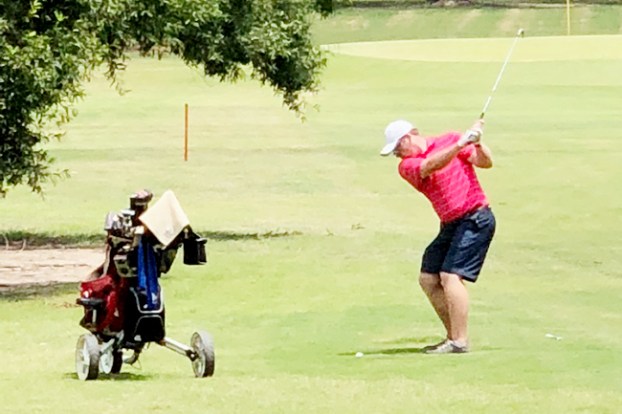 Lafayette's Zach Watts hits an approach shot during a round at the Duncan Park Golf Course in Natchez.

Zach Watts closed out his junior year on a high note.

After shooting poorly in first round of the Class 5A state tournament he turned this around on the second day to earn a top-four finish.

It is that momentum which Watts has managed to keep and carry over to this summer’s annual Coca-Cola Junior Golf Tour.

The northeast Mississippi junior golf tour began June 4 at the Ole Miss golf course and runs through July with nine events. The tour culminates with the ‘Tour Championship’ at the Starkville Country Club July 31-August 1.

The top eight in each age bracket will contend for the championship. After three tournaments the Lafayette golfer is in good position to make the cut.

“I haven’t played as well as I’d like to, really,” Watts said. “But, all in all I’d say I’ve definitely played pretty well and hit the ball pretty well.”

In the first event held in Oxford, Watts finished tied for first with a score of five-over par. He lost a tiebreaker for an office finish of runner-up.

The next event was held at the Big Oaks Golf Course in Saltillo last Monday. Watts came away with a third place finish and a score of three-over (75). Last Thursday’s event held at the Mississippi State Golf Course, which was rescheduled from May 29, Watts had a 10th-place finish.

He is currently sitting in second position with 180 points in the 16-18 age bracket. Watts trails Baldwyn’s Garrett Gray by 120 points.

“I would like to come out with a mindset of playing aggressive and just attack everything,” Watts said. “It’s not really (what course) fits my game. It’s just coming out, picking a shot and just going with it.”

Of the years Watts has competed in the Coca-Cola Tour this is his best start in the event.

The steady growth in his game is something that those close to Watts has seen coming for some time.

With Lafayette moving up to Class 5A last year was an adjustment for Watts, who was becoming one of the more dominant players in Class 4A. The strong finish in this year’s state tournament at Lake Caroline Golf Course in Madison gives the rising senior confidence to contend for a state title next May.

“(Watts) is a type of guy that he’s going to be on the course. He’s always practicing,” Lafayette golf coach Ryan Avent said. “He’s always the type of kid where if you tell him he can’t do something he’s going to try and prove you wrong.”

The tour continues on Thursday with a stop at Elm Lake Golf Course in Columbus, weather permitting, and then has a stop in West Point at Old Waverly Golf Course on Monday.

“I don’t believe I’ve played (Elm Lake) but I have some tournaments coming up in the Coca-Cola Tour that I’m looking forward to playing in,” Watts said. “They set up for my eyes and (I’m) eally confident with (those courses).”

Watts already has interest from Itawamba Community College and Blue Mountain College with hopes of getting an offer from one of them when the time comes. With one more season to showcase his skills there is also the chance other he could land on the radar of other schools.

“The sky’s the limit for him,” Avent said. “After the first round of the state championship he was down and out. Then the second round he just showed out. …he’s got a future. He’s going to get some offers when it’s available. He’s going to make somebody a very good golfer.”