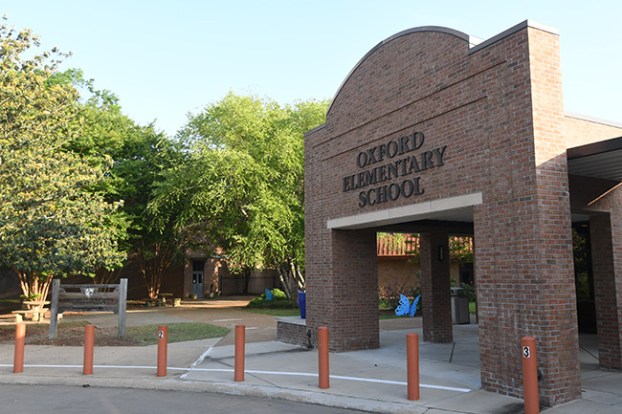 The city of Oxford wants to purchase Oxford Elementary and locate the police department in the building, in Oxford, Miss. on Monday, June 11, 2018. (Bruce Newman, Oxford Eagle via AP)

The city of Oxford is still interested in purchasing the Oxford Elementary School property in order to build a new police station, Mayor Robyn Tannehill said.
The announcement came during Tuesday’s meeting of the Oxford Board of Aldermen, during which Tannehill provided an updated timeline and listed specific reasons why the purchase of the property would benefit the city, Oxford Police Department and Oxford School District.
“I think most everybody’s aware that the city of Oxford is growing very fast, and the city and Oxford School District experience a lot of the same challenges in trying to determine how to plan for all of our growth,” Tannehill said. “It’s certainly a good problem, but it is a challenge nonetheless.”
In a school board meeting last Tuesday, June 12, the OSD Board of Trustees took no action in favor of or against accepting a bid from the city for the property, thus letting the bid expire. The reason, according to board member Ray Hill, is that the school board intends to negotiate with the city regarding the purchase price, without having bid it.
Both the city and OSD have conducted independent appraisals of the property, with the school district’s appraised property value of $2.8 million significantly higher than the city’s $702,500 appraisal and $2.1 million offer.
One of the main reasons for wanting to expand the Oxford Police Station is overcrowding, the mayor said. The current station was built around 30 years ago, and accommodated three officers. In 2018, OPD has 73 officers, with six more expected to be added once the city’s annexation process is complete.
“We have done things that could be considered Bandaids and duct tape over the past few years, from putting computers in cars so that patrols did not have to go back to the station to do their reports, to lots of different ways to get creative and be able to fit in this outdated building, but we are at capacity,” Tannehill said.
The city has looked into alternatives, other than buying the OES property, she said. One of those options is building an additional structure behind the current police station on Molly Barr Road. However, the cost of such a project is estimated at $6 to $8 million.
The other option, building a completely new facility on land the city already owns, would cost upward of $10 million, Tannehill said.
The benefit of purchasing the OES property, she said, is that the city would meet its goal of not having to raise taxes in order to complete the project. The city is currently waiting for OSD to provide them with a legal method to proceed with negotiation, pending acceptance or rejection of the current bid. Until then, the mayor said, the two parties do not have a way forward.
At the end of the day, Tannehill said it comes down to what’s best for the taxpayers of Oxford.
“In my opinion, the taxpayers of Oxford have already paid for them to build this building once. The taxpayers have been very generous in self-imposing a tax increase twice in the past five years, the first for $30 million, the second for $38 million,” she said. “We want the community to understand, we know we’re bidding with your money. We do not think this is Monopoly money, we do not think this is just a bid on a piece of paper. I want you to know… we’re doing everything we can not to raise your taxes.”