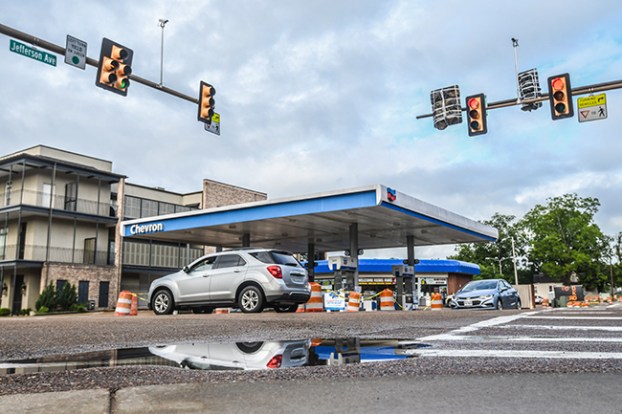 A portion of Jefferson Avenue west of North Lamar will be closed on two separate occasions to help speed up a widening project, in Oxford, Miss. on Thursday, June 21, 2018.

With work continuing on the Jefferson Avenue widening project, Oxonians can expect more road closures.
The Oxford Board of Aldermen voted in favor of a request from J.M. Duncan, Inc. to close Jefferson Avenue on two separate occasions, beginning on June 27. According to Bart Robinson, city engineer and public works director, the closures will allow the project to be completed prior to its projected Aug. 7 completion date.
“This is based on some of our conversation with [J.M. Duncan, Inc.] when we went to them and asked what we can do to speed this project along,” Robinson said. “They came back and said, due to the schedule, ‘We think we can cut some days off and the contract would be getting there, but we’d need do some underground work and street closures.”
The first closure will be from June 27 to 29, with the closed portion of the road reopening for the weekend on June 30. The second closure will be from July 2 through 11, with the road opening for one day on July 8.
The main portion of the road that will be affected is the portion from Lindsey’s Chevron, at the corner of North Lamar Boulevard and Jefferson Avenue, to the eastern edge of the Oxford Floral parking lot.
According to Robinson, workers will be drilling six feet deep into the ground and, at one point, 10 feet into the street, so closure is inevitable. This would speed up the project “hopefully by about five or six days,” he said.
Alderman Mark Huelse said, if the board granted the request, the work would have to be done ahead of time.
“They have to finish this by the end of July,” Huelse said. “If we give them this, it has to be done by then.”
The only work not currently projected to be completed by late July is the striping of the road, which is scheduled for Aug. 7. Robison said, due to the way striping is scheduled and depending upon the weather, the date of the striping work may not be able to be moved.

The City Hall courtroom was filled to capacity, with audience members spilling into the halls, during Tuesday’s meeting of the... read more