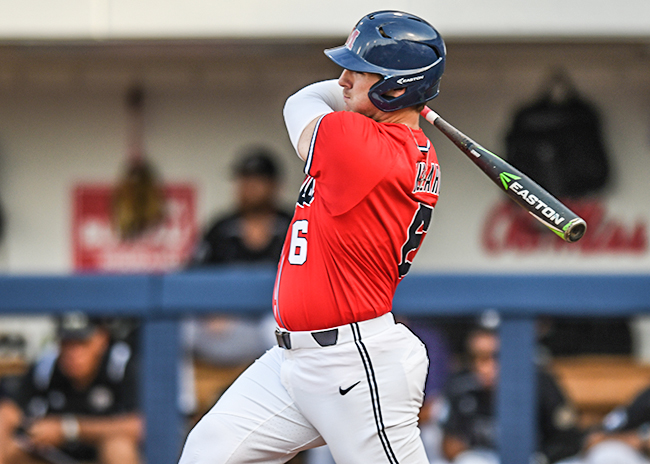 Ole Miss’ Thomas Dillard will get a chance to put his power on display for a national audience.

The local product is one of six players that’s been chosen to participate in the ninth annual College Home Run Derby, which will take place at TD Ameritrade Park in Omaha, Nebraska on June 30. The event will start at 7 p.m. and be televised on ESPN2.

The full list of participants will be released at a later date. Dillard is the third Ole Miss player to ever compete in the event, joining Colby Bortles (2016) and Sikes Orvis (2014).

Dillard led the Rebels with 13 home runs this season while driving in a team-best 59 runs. The former Oxford High standout has hit 17 home runs in his first two seasons at Ole Miss after leading the nation in homers his senior year with the Chargers.

It was a breakout season for the Rebels’ clean-up hitter after underperforming as a highly touted freshman that helped make up the nation’s No. 1 recruiting class in 2016. Dillard hit .310, raising his average 104 points from his freshman season, and also led Ole Miss in walks (49), runs (67) and on-base percentage (.439).

Dillard is playing his summer ball for the Cotuit Kettleers in the Cape Cod League.

2nd annual Students for Alzheimer’s Tennis Tournament to be…