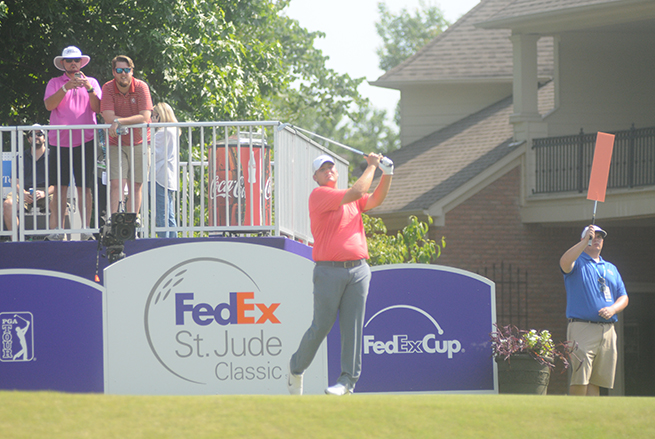 Braden Thornberry tees off at the 18th hole during the FedEx St. Jude Classic at TPC Southwind in Memphis earlier this month. (Jake Thompson)

Braden Thornberry keeps racking up the honors for Ole Miss. The Rebel golfer was named a PING All-American by the Golf Coaches Association of America. The GCAA announced the teams on Thursday afternoon.

For the second straight season Thornberry was named an All-American, making the Second Team this season. He is the third Ole Miss golfer in history to earn the honor twice, joining Darren Cole and Dave Peege.

Thornberry, the No. 2 ranked amateur golfer in the world, just completed his first career major championship. The Olive Branch native played in the U.S. Open in Southampton, New York last week, missing the cut by one stroke. He competed in the FedEx St. Jude Classic in Memphis earlier this month and came away with a top-25 finish in his second run in that event.

This is the latest honor Thornberry has earned this season. He was named the school’s first Ben Hogan award finalist and was also a finalist once again for the Fred Haskins award. Thornberry won the Haskins trophy last year, given to the top male collegiate golfer.