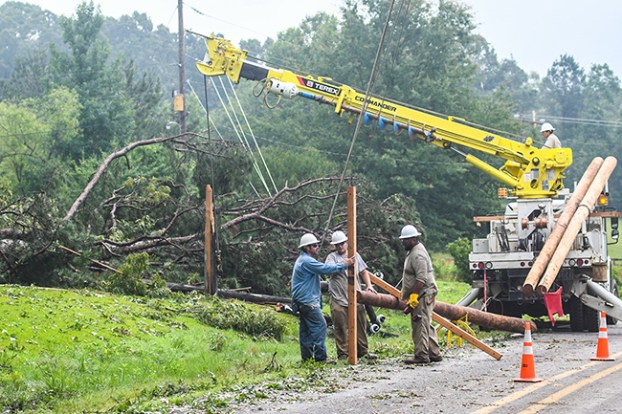 According to the National Weather Service, the damage was not caused by a tornado and straight line winds are to blame.

“We did have a severe thunderstorm warning for most of the west side of Lafayette County for straight line winds and quarter-sized hail,” William Churchill, with the NWS, said. “There’s not any evidence of tornado activity, but the winds are able to cause severe damage.”

Three major roads leading into Taylor were impossible to travel following the storm, according to Taylor resident and alderman Ellen Meacham. Meacham said she was traveling home from Memphis at the time of the storm, and could see the lightning in front of her.

As she approached the Taylor town limits, however, there was a problem.

“I got all the way down Old Taylor Road, and I couldn’t get into Taylor. There was a small tree down, a power line and a big tree,” Meacham said. “I decided to go down Highway 328, and there were power lines down there too. A sheriff’s deputy said there were several trees down in the road. I asked about going down Highway 7, and he said there were trees down there, too. At this point I was tired and not feeling well, so I decided not to keep driving around and drove back to Oxford and got a hotel room.”

Meacham said she was able to make it home this morning, as road crews had cleared a backroad off Highway 7.

The storm first hit a little after 10 p.m., with downed trees knocking down at least five power poles, according to Marlin Williams, with North East Mississippi Electric Power Association.

Over 1,700 people in Taylor and its unincorporated area, 95 percent of the population, are without power, and will be until late afternoon, Williams said.

“When it rains really hard the ground softens and when that happens trees you’d think would be firmly rooted, fall,” Williams said. “When that happens, we have to clear the trees out and take necessary steps to make sure the lines are clear, take the broken poles out of the ground and put the spans on new poles.”

Williams added that crews are working as “quickly and safely” as possible to get electricity restored and get the roads cleared of downed lines, which can be deadly. For updates, Williams suggested people visit the NEMEPA Facebook page.

The Mississippi Encyclopedia officially launched on a new online platform this week. While the text version of the encyclopedia was... read more