Oxford, Water Valley better each other with joint summer 7 on 7 workouts 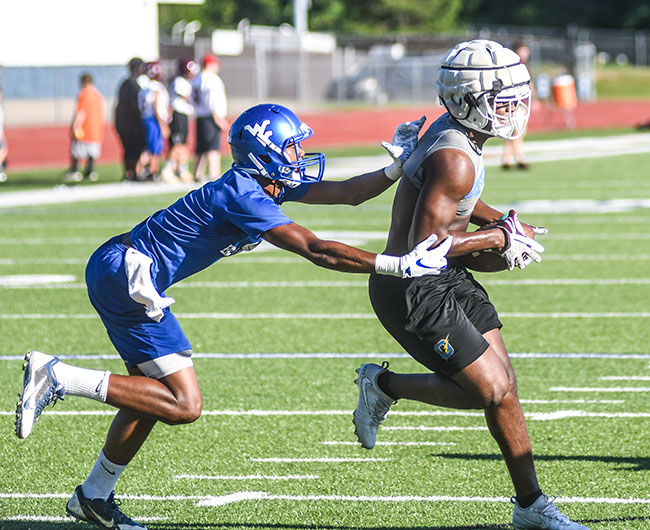 The month of June has become a third season for many high school sports. With practices and a limited amount of games allowed to be scheduled teams are getting a jump start on preparations for their upcoming seasons.

Football is no exception with the growth of 7 on 7 competitions in recent years. Along with attending college camps, schools are taking it upon themselves to also host other area teams.

Oxford is one of those who host a weekly gathering of schools for friendly games of 7 on 7. The Chargers have been doing this for years, dating back to when Mississippi Association of Coaches Hall of Fame coach Johnny Hill was in charge.

One area team that has participated for close to a decade is Water Valley. The Blue Devils come up every Monday to partake 7 on 7 games.

“Us and Oxford have been a constant and we get good competition,” Water Valley coach Brad Embry said. “That’s why I like going because Oxford is going to put a bunch of good athletes on the field that know how to throw the football. That’s what 7-on-7’s about, being able to stop that.”

Since Hill’s departure as the Chargers’ coach a couple years ago Chris Cutcliffe, the current Oxford head coach, has continued the summer tradition. He even continued inviting teams that the Chargers will not see once the regular season commences in August.

“It’s good to get a chance to compete against somebody else,” Cutcliffe said. “We normally go play a couple (7-on-7) tournaments and that’s great work as well but I think Monday night’s are a great time to get some work in. We get some good JV work in as well.”

Most times it is the quarterbacks and receivers who travel to Bobby Holcomb Field but sometimes the lineman will get in on the action, providing the closest thing to a true scrimmage that most teams will experience during the summer break.

Other schools that have participated in the Oxford-hosted workouts have included New Albany, Independence, Coffeeville, Senatobia and M.S. Palmer.