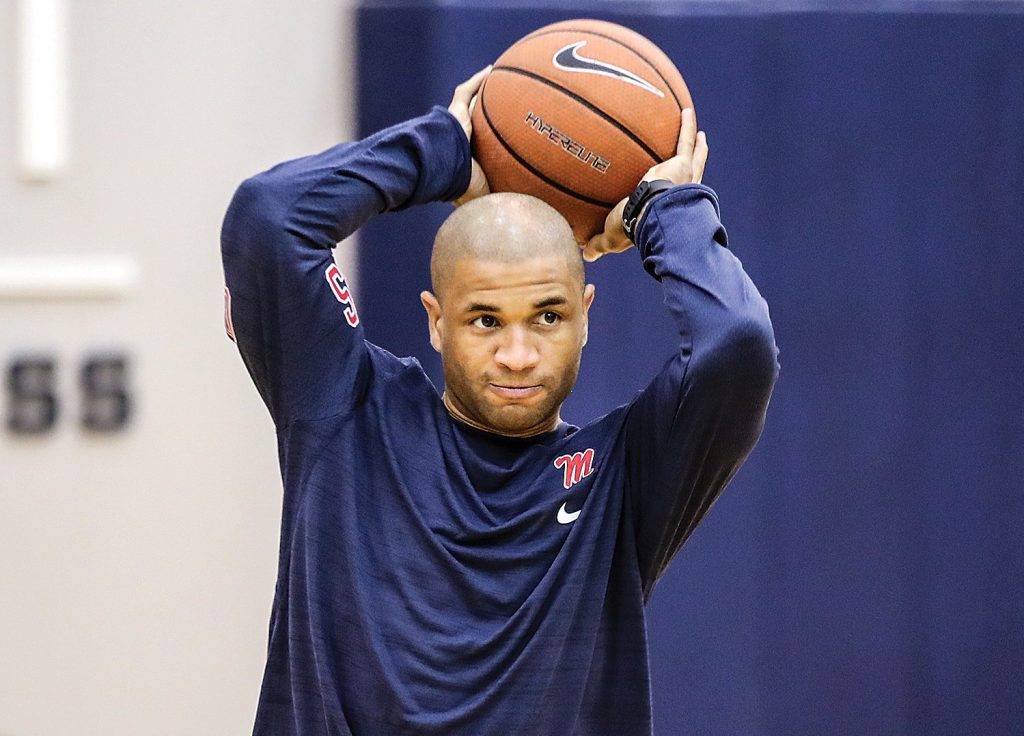 Sixteen years ago, Ronnie Hamilton had a decision to make.

Hamilton parlayed his experience and production as a four-year letterwinner on Duke’s football team into a free-agent contract with the New York Giants in 2002. But Hamilton was cut before training camp was over, forcing him to ponder whether he wanted to continue pursuing his shot at the NFL or start working toward another career.

“Just in my mind, I said, ‘We’ll put down one dream and chase another,” Hamilton said.

That meant not only giving up football but transitioning into another sport. Now the 38-year-old Hamilton is entering his 14th year as a college basketball assistant and his first at Ole Miss after Kermit Davis brought Hamilton and fellow assistant Win Case with him from Middle Tennessee State after being hired in March.

The more common move for former players is to start a coaching career in the sport they played, so how did Hamilton’s interest go from playing one sport to coaching another? Growing up in basketball-crazed North Carolina provides a simple explanation.

“When I was younger, basketball was kind of always my passion,” said Hamilton, who played basketball and football at J.F. Webb High in Oxford, North Carolina. “I never, ever wanted to pursue coaching football. Loved playing it, but there was kind of always something inside me. I grew up on Tobacco Road, and so you’re watching Duke, (North) Carolina and N.C. State in the ACC at that time. It was just always something that was kind of in the back of my mind and in my heart.”

A 5-foot-8 guard, Hamilton was undersized on the court, but his athleticism at cornerback earned him a football scholarship from Duke. Hamilton broke into the starting lineup as a freshman and started 38 games in his career, leading the Blue Devils in pass breakups each of his final three seasons and earning honorable mention All-ACC honors as a return specialist in 2001.

Yet basketball was never far from his mind.

“In high school, I played hoops for four years and followed recruiting,” Hamilton said. “I just was a fan. I finally made that decision to pursue the coaching piece from a basketball standpoint.”

Hamilton got started as a graduate assistant at UNC Pembroke, a seed he planted years earlier by making the 20-minute drive from his high school to watch the Braves practice whenever he could. That led to his first job as a full-time assistant at Division II Tarleton State in 2005 before landing at the Division I level at The Citadel three years later.

Stints at Tulane, Houston and MTSU followed, a quick ascension in the coaching ranks that Hamilton said wouldn’t have been possible without his two years at UNC Pembroke that gave him the kind of comprehensive coaching experience most grad assistants don’t get.

“It was the best thing for me for the path I was taking because as a grad assistant, which is different at the Division II level, I could do everything,” said Hamilton, who got his master’s degree in physical education from Pembroke in 2005. “I could be on the floor coaching. I was on the road recruiting. I was 23, and it was kind of like a hands-on internship in terms of being able to immerse yourself in every aspect. I took full advantage of it.”

Hamilton also served as Pembroke’s recruiting coordinator and has had a passion for pursuing prospective players ever since. He quickly earned a reputation as a tenacious recruiter, something that served him well in 2014 when his time as an assistant at Houston came to an abrupt end once head coach James Dickey resigned.

Davis had a vacancy on his staff at MTSU at the time and wanted to fill it with a relentless recruiter. After crossing paths with Hamilton at that year’s Final Four, Davis was sold. 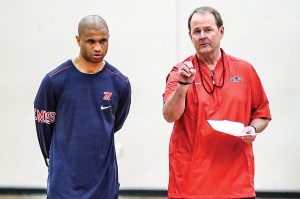 “He’s a tireless worker as far as a recruiter,” Davis said. “He’s good in that when you’re involved with a player, he’s touched all bases, all the decision-makers in the process. I’ve done it long enough where I walk into a situation in recruiting, you just know talking to moms, dads, high school coaches, AAU coaches and uncles, the whole gamut has been worked. He can juggle a lot of different recruiting balls at one time and get involved with a lot of different players.

“It’s a different combination. It really is. But he’s adapted well and he’s developing into a really good coach on the floor also.”

Hamilton also helps Davis with scouting and game planning. He works primarily with guards during practice, but nearly two decades after taking his final snap, he still can’t help but emphasize the defensive end of the floor regardless of who he’s coaching.

MTSU benefited from it in its 1-3-1 morphing zone, finishing in the top 40 nationally in scoring defense each of the last two seasons. The Blue Raiders allowed more than 66 points per game just once with Hamilton on staff.

“How can we stop the other team from scoring baskets, and that is really where that football mentality comes in,” Hamilton said. “In practice, I almost seem to be coaching and working toward the defensive side. You have to do both obviously, but how can we come up with a game plan and really being conscious of that side of the court?”

By comparison, Ole Miss finished last season 306th out of 351 Division I teams in points allowed and hasn’t yielded fewer than 72 points on average in any of the last three seasons. Davis expects Hamilton’s influence to help the Rebels improve on those numbers.

“For him to have the success he did in (the ACC) and then get a free-agent camp in the NFL, you’ve got to have some toughness. He’s got that,” Davis said. “He’s got toughness, he’s got resiliency and a lot of pride obviously.”

Hamilton also has aspirations of running his own program one day, but there’s no rush. His job now is to help revive an Ole Miss program that’s fresh off a last-place finish in the SEC amid its first losing season in more than a decade, a task Hamilton views as the latest opportunity to prove himself along an unconventional career path.

“I know it’s different from probably 99 percent of the people in this profession that I’m involved in,” Hamilton said. “I’m always trying to prove I belong and I’m subconscious of it every day and every year. I don’t take this opportunity for granted.”

Why Dallas Woolfolk needed to walk away from Ole…