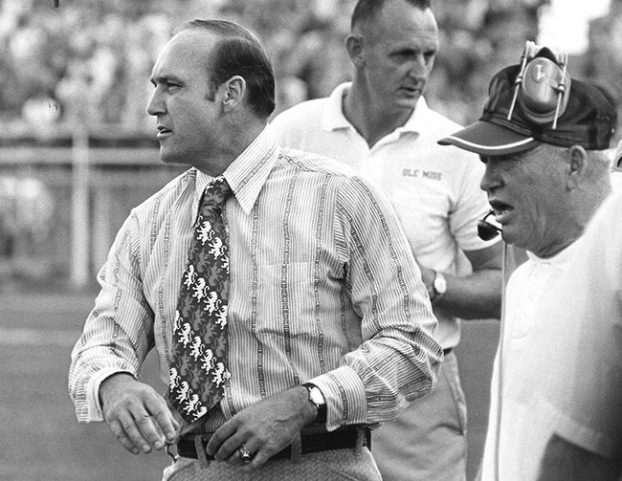 Funeral services will be held Tuesday at 2 p.m. at Grace Presbyterian Church in Fort Payne, Alabama, according to a release from the school. A private graveside service will be held at a later date.

The first alumnus to serve as the Rebels’ coach once Vaught retired in 1970 after 24 seasons at the helm, Kinard led Ole Miss to a 10-2 record in his first season and won 16 games during a three-year stint that ended early in the 1973 season when Vaught came out of retirement to take over after a 1-2 start. His overall head coaching record was 20-14-1.

Kinard, a two-sport standout during his playing days, was part of two SEC championship teams as a halfback and defensive back for Vaught from 1952-55. He also earned two letters in baseball, earning All-SEC honors in 1956 when Ole Miss won the SEC’s Western Division and finished third in the College World Series.

A Jackson native, Kinard was taken by the Cleveland Browns in the second round of the 1956 NFL Draft. He also played for the Green Bay Packers before ending his professional career in 1960 with the Buffalo Bills, who were in the American Football League then.

He had three brothers who also played for Ole Miss, including College and Pro Football Hall of Famer Frank (Bruiser) Kinard.

Summer is still in full swing and preseason football has yet to begin but there are already coaching staffs in... read more